Investors remained on edge last week as the US election drew closer. It was the worst week for global equity markets since March, with stock indices in Asia, Europe and North America all falling in the final few days before the US goes to the polls.

The uncertainty surrounding the vote has been a source of market volatility this year. Nervousness about the result increased last week; the VIX ‘fear index’, a measure of expected volatility in the US stock market over the next month, jumped to double its long-term average.

In the short term, the largest risk to investors is that of a contested result. The resultant turmoil would spook markets in the short term, even though Biden’s solid lead in the national polls makes that outcome less likely.

However, investors should remember that, historically speaking, there hasn’t been a great difference in stock market returns whether Democrats or Republicans are in power. And fund managers base their decisions on the long-term prospects of the companies they invest in, rather than short-term political shifts.

“It has not affected our investment landscape one bit,” says Jim Henderson of Aristotle, manager of the St. James’s Place North American fund, while discussing the 2020 election.

He adds: “Quality businesses adapt. They adapt to whatever landscape they are faced with over long periods of time. Those things change very slowly, and the businesses that we invest in will continue to adapt, continue to prosper.”

Although the prospect of a second wave has been stalking markets since the summer, last week there was a sense that it had appeared in earnest. Fresh restrictions were implemented in France and Germany, and Boris Johnson announced over the weekend that England will follow suit on Thursday with a second national lockdown.

“Perhaps we have all been too complacent with respect to a second wave”, notes Mark Dowding of BlueBay Asset Management, co-manager of the St. James’s Place Strategic Income fund.

He adds, however, that European countries are well supported, such as with the EU’s recovery fund, as well as by central banks and through other government tools. In fact, Christine Lagarde, President of the European Central Bank, last week hinted at a new round of economic stimulus later in the year. However, referencing Europe’s rising case numbers, she warned that the risks are “clearly tilted to the downside” for the continent.

Rising COVID-19 case numbers threaten to derail the eurozone’s economic recovery. On Friday, official figures showed that the region grew 12.7% in the third quarter. But due to the resurgence of the virus and the corresponding lockdown measures, economists are now downgrading their projections.

There was a similar story in the US on Thursday, when data revealed the biggest single-day jump in COVID-19 cases since the start of the pandemic. Although an increase in testing accounts for some of that trend, the White House infectious disease adviser said last week that a large number of states were “going in the wrong direction.”

On Thursday, results were released for four of the biggest names: Alphabet (which owns Google), Amazon, Apple and Facebook. Their combined sales were up 18% in the last quarter, compared to last year. Their post-tax profits were also up by 31%.

Technology companies have thrived throughout the pandemic, thanks to the fact that people are spending more time online, and businesses are using their services more extensively. Their share prices have surged as a result, although several of them were down last week as investors cashed in during a broad sell-off triggered by alarm over surging virus cases and nervousness around the US election.

Big Tech is also facing major challenges. Antitrust regulators are acting against Google, arguing that the company uses its monopolistic position to stifle competition. And social media CEOs were challenged in the US Senate last week over how they moderate content on their platforms, as well as how that content affects politics.

This week, however, it will be politics that affects content. And the posts of one high-profile Twitter user will be especially well-read, as he reacts to the vote count from the White House.

We haven’t got long to wait until we find out who will be in the White House for the next four years.

Biden is still ahead in the polls, but they were notoriously wrong in 2016. The US stock market has got a good track record of getting it right. If US equities were up in the three months leading to election day, the incumbent party won in 19 of the last 22 presidential elections.1

Given the performance of the S&P 500 since August, that suggests victory for Trump. Yet betting markets are moving in the opposite direction, putting Trump’s chance of re-election at just 35%, as at the middle of last week.2 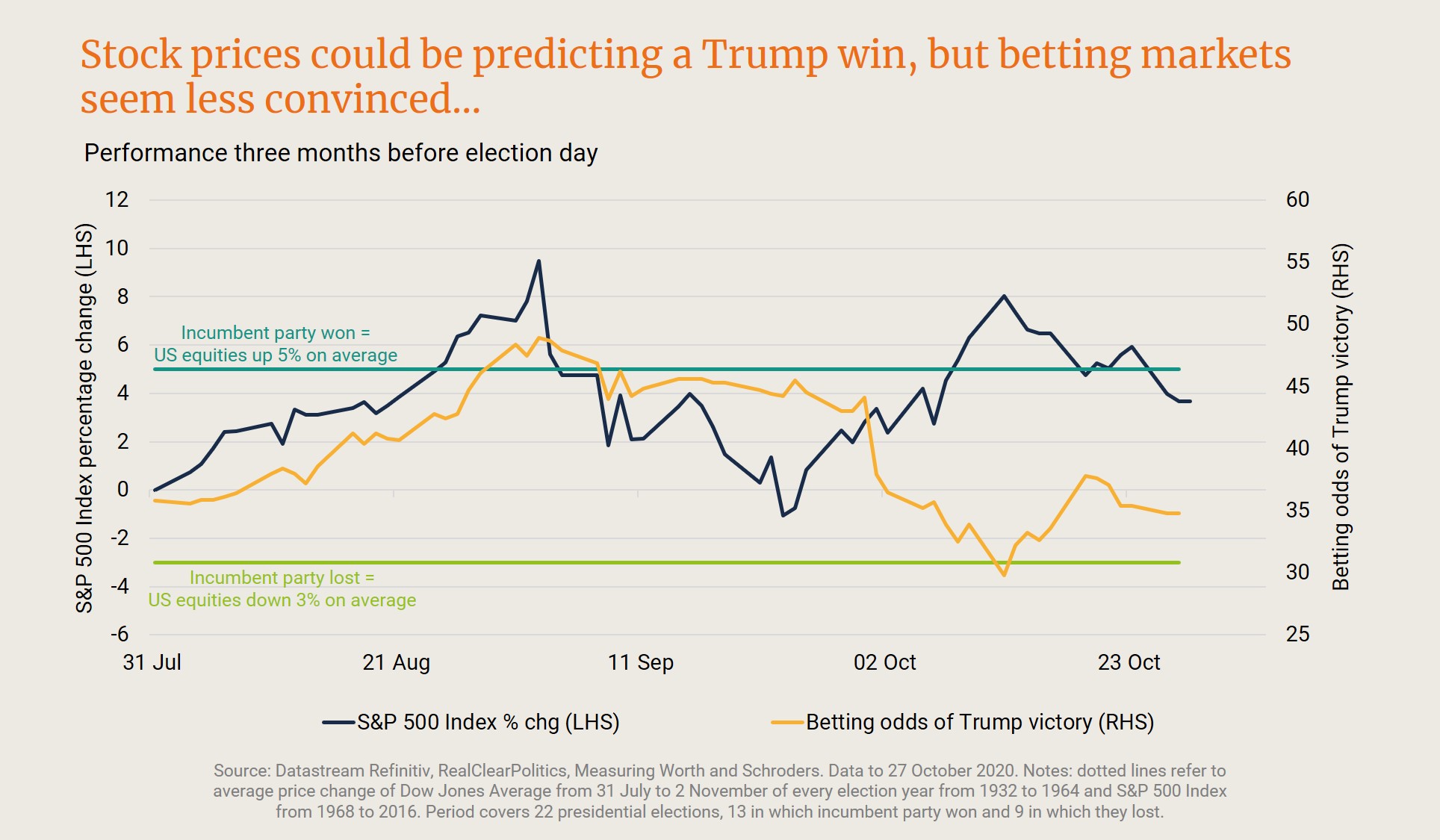 It could be that betting markets have too much confidence in a decisive win against Trump, repeating the mistake they made about Hillary Clinton in 2016. Or it could be that financial markets believe that Biden’s lead reduces the chance of a contested result, which would be more negative for stocks (at least in the short term) than fears of higher taxes or greater regulation under a Biden presidency.

But in the long run, does it matter? Whether the US ends up with a divided government or a clean sweep by either party makes little difference to the long-term performance of the stock market. Since 1929, one party has controlled both chambers of Congress and the presidency in 45 of those years. The S&P 500 rose 7.45% on average during those years. Over the remaining years of a split government, the index rose an average of 7.26%.3

Whatever short-term market reaction we see in the aftermath of the result needs to be kept in the context of our longer-term plans. It’s important investors don’t overreact.

How did the US election, COVID-19, and Brexit trade negotiations affect markets in October?

“If anything could have pulled me out of retirement, it would have been an Indiana Jones film. But in the end, retirement is just too damned much fun.”

– The late Sir Sean Connery on the importance of enjoying your golden years.