At the time of writing on Monday lunchtime, markets were rising thanks to a rare piece of good news about COVID-19. Pfizer and its German partner, BioNTech, have said that their experimental vaccine for the virus is more than 90% effective.

It’s too early to understand the full impact of the update, but so far it has been positive for global stocks. There have been large increases in the share prices of companies that have been worst-hit by the pandemic, such as those in the transport and hospitality sectors.

Meanwhile, last week, as US media networks declared Joe Biden the President-elect, it seemed that the bitter election contest was over. Trump hadn’t conceded by Monday morning, and his campaign had launched legal challenges against the count, but investors appeared to have put the episode behind them.

Markets have held their nerve despite the turmoil. Major stock indexes in the US enjoyed gains throughout the week, and the picture was similar in Europe and Asia. Investor confidence appeared steady even as vote counting dragged on due to record numbers of mail-in ballots. Wall Street’s VIX index, which measures expected volatility in US stocks, actually fell throughout the week (see “In the Picture” below).

So, now that the dust has settled, what can investors expect? It looks like Biden will be inaugurated in January, but he might face a divided Congress, in which the Republicans control the Senate. That means it will be harder for his administration to effect major change.

In that scenario, tax rises, more scrutiny of Big Tech, or more regulation on the energy, financial, or healthcare sectors, will be less likely than if the Democrats had swept through with the “Blue Wave” that some observers had been expecting.

However, the new administration is expected to hit the ground running with an extra economic stimulus effort. With both sides agreed on the need for another round of spending, it seems likely that a compromise will be found. Of course, a divided house may put constraints on the size of the deal.

“A split in the balance of power within the House and the Senate will likely limit the scope of any forthcoming US fiscal package,” says Mark Dowding of BlueBay Asset Management, a fund manager for St. James’s Place.

He adds that although a deal is probable – especially for troubled sectors like airlines and hospitality – “it is likely to fall well short of the multi-trillion spending plans that the Democrats had been keen to enact had they held control over all three branches of the Executive.”

Ant under the magnifying glass

The financial technology company was scheduled to list shares in Shanghai and Hong Kong last week, in an initial public offering (IPO), that was set to be one of the largest ever, at around $37 billion.

However, regulators in Beijing have put the brakes on the process. It’s not fully clear why, although officials have expressed concerns about “market stability” – which may relate to the company’s size, structure, or investor appetite in its shares; plus, the founder, Jack Ma, has also recently made controversial statements about the need to reform the financial sector.

The IPO’s delay might not be the worst thing for investors. Appetite for financial technology listings is fierce, notes Martin Hennecke, Asia Investment Director at St. James’s Place. He adds that investors should be cautious when participating in much-vaunted opportunities in fashionable sectors.

“In the year preceding the 2000 tech bubble, we saw a massive surge in technology fund launches amid a similar surge in demand for such products. This illustrates a fundamental problem of the financial industry. What has done well in the recent past simply sells well due to what is known as the concept of ‘recency bias’”, he says.

He adds: “Fast forward to today, with a surge in investor enthusiasm towards technology and healthcare/biotech IPOs, both in Hong Kong and Shanghai’s STAR Market lately, I would question if enough careful consideration and due diligence on each of those companies’ businesses is being done by investors nowadays.”

Don’t bank on a speedy recovery

Finally, the Bank of England made an important announcement last week. The Bank said it will buy another £150 billion of government bonds (taking the total to £895 billion) over 2021, in an effort to boost spending and speed up the UK’s economic recovery.

The news came as Chancellor Rishi Sunak announced an extension of the furlough scheme to the end of March next year as the UK’s second national lockdown took hold. It’s been taken as a sign that the UK has a long road to recovery ahead.

“This marks a significant increase in pessimism from the BoE on the permanent impact of the pandemic on the UK economy,” says David Page from AXA Investment Managers, a fund manager for St. James’s Place.

Still, investors in UK equities should remember that the health of the UK economy isn’t the same thing as the health of its leading companies.

There are plenty of UK stocks whose presence in international markets, or whose expertise in certain sectors, acts as insurance against the performance of the UK in general.

“There’s no reason to be apologetic about being invested in the UK stock market”, says Richard Colwell of Columbia Threadneedle, manager of the St. James’s Place Strategic Managed fund.

He adds: “Yes, we haven’t got sexy, mega-cap US tech, but there are a lot of really good businesses – world-class businesses – and they’re not all beholden to the UK’s economy.”

The chancellor’s Stamp Duty freeze and the so-called “race for space’” have driven the average house price to a record high in the 12 months to October.1

But the property price boom that followed the spring slowed last month, according to Halifax. With the UK entering its second lockdown, the outlook for house prices could turn.

Those looking to move between now and the end of the stamp duty freeze on 31 March may find that the significant increase in the price of detached properties (compared to flats) means they have been priced out of the market – but their desire to move leads them to look for a compromise.2

Buying a new property that better meets the requirement and opportunities of the new normal might sound like an attractive option, says Melloney Underhill, Marketing Insights Manager at St. James’s Place.

“But first you need to weigh up your own priorities and situation, in the context of the factors impacting the market. That’s where an adviser can help. As a minimum, they will provide a useful sounding board,” she adds.

For investors whose property forms part of their retirement plan, the outlook underlines the risks of being insufficiently diversified.

“As we move through autumn and into winter, the macroeconomic landscape in the UK remains highly uncertain,” notes Russell Galley, Managing Director at Halifax. “Though the renewed lockdown is set to be less restrictive than earlier this year, it bears out that the country’s struggle with COVID-19 is far from over. With a number of clear headwinds facing the housing market, we expect to see greater downward pressure on house prices as we move into 2021.”

Your home may be repossessed if you do not keep up repayments on your mortgage.

Wall Street’s Cboe Volatility Index dropped last week, indicating that investors held their nerve throughout the US election turmoil. The index measures expected volatility over the coming month in large US stocks.

This should serve as a reminder that investment horizons should always be long term. It’s also worth remembering the context: despite having fallen since March, the VIX index is still around twice as high as the long-term average. That’s because the pandemic is a bigger cause of concern for the world economy than anything else. 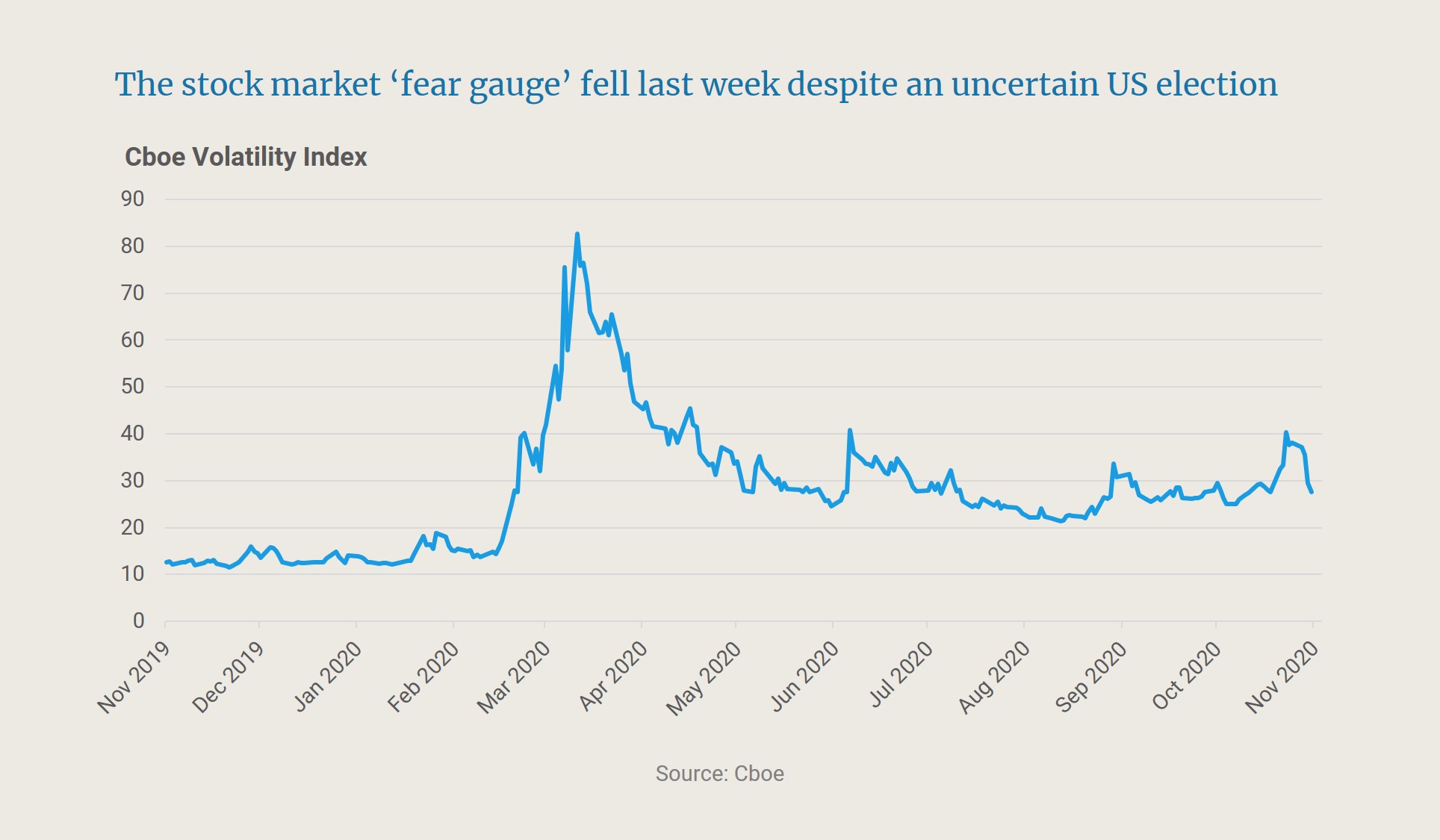 While I may be the first woman in this office, I will not be the last—because every little girl watching tonight sees that this is a country of possibilities.