Six countries, 44,000 trial participants, 90% effective: the numbers in Pfizer’s press release last week were promising. On Monday, the US drug giant announced that the late-stage trial of its COVID-19 vaccine, being co-produced with Germany’s BioNTech, had produced some strong results.

The news fuelled a rally in many risk assets as, for the first time since March, investors saw a path to normality that looked a little clearer.

Today’s announcement by Moderna of a vaccine with 94.5% efficacy is doubly encouraging.

“The uncertainty that has plagued us through most of 2020 has dramatically declined,” said Johanna Kyrklund, Chief Investment Officer at Schroders and manager of the St. James’s Place Managed Growth fund.

However, last week’s market optimism wasn’t universally felt. The most striking feature of the rally was the divergence between stocks that performed well and those that lagged.

Companies whose share prices have struggled throughout the pandemic, such as those in the hospitality or travel sectors, enjoyed a return to good fortune. Cruise-ship operator Carnival Corp’s shares ended Monday up 39% over the day, for example, and British Airways owner IAG saw its share price rise over 40% throughout the week.

On the other hand, some of the “stay-at-home” stocks that have been beneficiaries of the pandemic saw their share prices decline. Some of the these were the high-flying technology companies whose revenues have grown in 2020 thanks to more people shopping online and working from home.

Towards the end of last week, enthusiasm about the vaccine seemed to have been dampened by evidence that COVID-19 cases are still on the rise in many areas. In the US, for example, new cases reached their highest level yet on Friday, at 184,000 per day.

We may see similar peaks and troughs across markets this week as they react to the news of Moderna’s vaccine trials.

Widespread adoption of a successful vaccine is some way off even in the best-case scenario, noted AXA Investment Management, a fund manager for St. James’s Place: “Even with a successful vaccine, a mass roll-out will face logistical challenges and could take longer than the market is expecting.”

While encouraging, the vaccine is unlikely to boost economic activity until next year, said Capital Economics. It added that given the breakthrough has led to “light at the end of the tunnel” and a belief that the virus can soon be controlled, it might encourage countries to impose more intense lockdowns in the interim.

So, even though last week’s announcement is undeniably good news, the best stance for investors to adopt is probably one of cautious optimism.

How should investors act now?

Given last week’s events in markets, some market observers are arguing that we’re at the start of a major market ‘rotation’, in which out-of-favour sectors begin to have their time in the sun. In that scenario, fast-growing technology stocks, and other strong performers during the pandemic, would begin to lag behind stocks that benefit more directly from economic recovery, such as banks and energy companies.

That may be the case. But given how difficult it is for investors to time such an event, the best course of action is to maintain a diversified set of investments that includes assets on both sides of the rotation, says Gavin McGhee, Wealth Management Consultant at St. James’s Place.

He adds: “You can’t rely on one particular investment style, sector, or market continuing to be the flavour of the month.”

Given this challenge, investors should resist the urge to change their approach on the back of major announcements like Pfizer or Moderna’s. One of the benefits of diversification is that it ensures portfolios aren’t too reliant on, or susceptible to, any single event.

“As fund managers we like to pretend that we have a crystal ball, but in reality, to build a portfolio, you need to consider a range of potential scenarios. You seek to make investments that can cope with multiple outcomes,” adds Schroders’ Johanna Kyrklund.

COVID-19 aside, there are plenty of potential sources of uncertainty ahead.

Investors were reminded of the strained relationship between the US and China on Friday, when the US issued a ban on American investors owning shares in Chinese firms that are suspected to have links to the country’s military. The share prices of some of the Chinese companies named in the order dropped on the news.

Meanwhile, although the US election is behind us, there are still political risks in Washington. The Trump campaign’s legal challenges to the result of that contest are one source of concern, because even if they have little material impact on the transfer of power, they might mean that the current administration is less focussed on passing a new fiscal stimulus package.

Finally, Brexit trade deal talks are approaching their final stage. Although the UK’s chief negotiator, David Frost, said that there has been progress in recent days, he has little to show for it yet. Over the weekend, Ireland’s foreign minister told reporters that the two sides have to make progress this week if a deal is to be successful.

The Office of Tax Simplification (OTS) has published the first of two reports reviewing Capital Gains Tax (CGT), requested by Chancellor Rishi Sunak in July. It suggests that some of the current rules can “distort” investor behaviour and makes several recommendations, including a cut in the annual allowance and better alignment of tax rates on capital gains and income.

The 136-page report has been produced with unusual speed, adding weight to the view that the government is keen to find ways to fill the huge hole in its finances caused by COVID-19. The reforms could generate revenue of £14 billion in the first year, although the OTS acknowledged that figure could be much less if the proposals prompted a change in taxpayers’ behaviour, as they almost certainly would.

One of the key recommendations relevant to investors is to charge capital gains at Income Tax rates – effectively doubling CGT rates from their current level. Another is to reduce the current £12,300 annual exempt amount . The OTS says that a cut to around £5,000 would double the number of people paying CGT each year.

Critics have been quick to raise concerns over the recommendations, which include scrapping the CGT re-set in the value of assets transferred on death. Owners of small businesses could also be affected by proposals to review business assets disposal relief and to apply tax to cash built up inside a company.

CGT is currently paid by around 250,000 individuals1, suggesting that reforms to CGT won’t impact the majority of taxpayers. Despite this, it won’t have escaped the chancellor’s notice that much of any extra tax burden is likely to fall on core Tory voters.

“Some of the recommendations are relatively radical, but they are not official policy, so it doesn’t make sense for individuals to change their financial plans at this stage,” suggests Tony Wickenden, Technical Business Development Director at St. James’s Place. “We may hear more about the government’s plans for capital taxes in next year’s Budget. But this review underlines the importance of making the most of appropriate tax wrappers such as ISAs and pensions that shelter your assets from CGT, and any further liability to Income Tax.”

Some technology stocks fell after news of a vaccine emerged last week, in a reversal of a pandemic-related trend. Last week the Nasdaq-100 index, which is more heavily skewed towards big technology names, lost its lead over the S&P 500 index which includes a broader range of US equities. 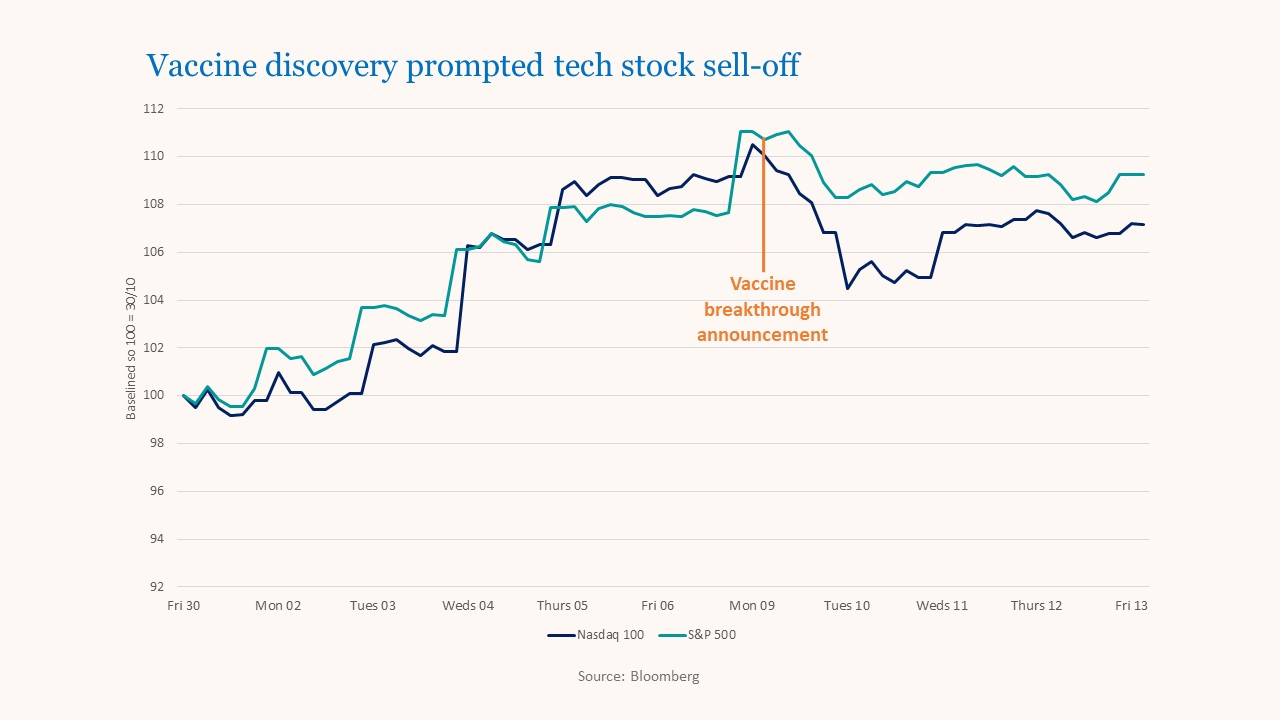 “Today is a great day for science and humanity.”

Axa and Schroders are fund managers for St. James’s Place.