Vaccine announcements proved themselves to be like buses last week, after two arrived in quick succession.

Moderna announced that its phase three clinical trials found its vaccine to be 95% effective, just one week after Pfizer/BioNTech had announced their results. Early this week, University of Oxford/AstraZeneca said their own vaccine is more effective than expected. With more such announcements likely to follow soon, there is plenty of reason to be optimistic.

So far, the news has driven a reversal of one of the main trends that investors have witnessed during the pandemic. Since markets fell in March, stocks in sectors like real estate, finance and energy have struggled, while the pandemic-resistant names in technology have surged. But in the last couple of weeks that trend has been upended.

Some fund managers now believe that the market will continue to ‘rotate’ – and ‘value’ stocks will enjoy a resurgence after having played second fiddle to their ‘growth’ counterparts.

“I think a bit of recency bias is creeping in for those who predict that the rotation cannot last,” says Nick Purves of RWC, manager of the St. James’s Place Equity Income fund.

“The reality is that the last few years, in which one investment style has dominated returns to such a significant extent, is a very rare occurrence. Historically, markets have tended to move from one regime to another and the turning points were often associated with key macro events,” he adds.

Still, there are some major “known unknowns” that must be monitored closely, notes John Wylie, Head of Healthcare at Magellan, which manages the St. James’s Place International Equity fund.

The first is that it isn’t certain how long vaccines are effective for. Although the leading vaccines have been proven to be effective by their late-stage clinical trials, it’s hard to say for how long people who receive those vaccines will remain immune.

There’s also a lingering risk that COVID-19 could mutate into a form that can’t be prevented by the existing vaccines. The “mink variants” that led Denmark to cull its entire population of minks this month is one such cause of concern.

And finally, producing and distributing vaccines at scale will be a challenge. One consideration is that the vaccines must be transported and stored at low temperatures – at minus 70C in the case of Pfizer’s. However, the one from University of Oxford/AstraZeneca can be stored at normal refrigerator temperature, which may make it easier to transport long distances, or to developing economies.

“The good news is the MRNA vaccine solution [a new technology used by Pfizer’s and Moderna’s programmes] isn’t incredibly technical to deliver from a manufacturing perspective. The bad news is there’s no existing infrastructure at scale yet to deliver it,” adds Wylie.

He points out, however, that the AstraZeneca and Johnson & Johnson vaccines have been developed using a more traditional approach, for which there is greater manufacturing capacity already. So, if the final-stage results of those vaccines also bring positive news, potential vaccine production could be much higher.

In the meantime, the world’s economies must live with the effects of COVID-19. That means that fiscal stimulus packages, and other forms of government or central bank support, will be important in supporting investor confidence. Last week, Steven Mnuchin, the US Treasury secretary, said that the emergency lending facilities set up by the Federal Reserve would not be extended. The news tempered some of the market optimism that had been building thanks to the vaccine news.

Finally, the administrators of the S&P 500 index of large US stocks announced that Tesla would join its ranks at the end of December. The move will broaden its shareholder base as it gets bought by funds which track the index. Thanks to a surging share price in 2020, Tesla is now the world’s most valuable automotive company, despite producing a fraction of the vehicles of many of its rivals.

Because the company is on a run of five profitable quarters it now qualifies for inclusion in the index. Yet the announcement breaks several precedents, says Mark Baribeau from Jennison Associates, which co-manages the St. James’s Place Balanced Managed fund (which holds Tesla).

“It is the biggest stock ever to go into the index, and it is unprecedented to have a five-week lead time between the announcement of a new addition and the effective date. It is also unprecedented for them to consider implementing inclusion as a two-step process.”

He adds: “Whilst it is hard to say whether the impact of this broadening of the shareholder base will be temporary or permanent, what is clearer is that the company is on its way to becoming the only global automotive player to have continued to expand throughout 2020, with its popular new Model Y only just beginning to ramp up production in the third quarter of the year.”

The announcement meant that Christmas came early for Tesla’s CEO Elon Musk, who saw his wealth swell by $15 billion to $117.5 billion, putting him on course to pass Facebook’s Mark Zuckerberg to become the world’s third richest man.

New research published last week by the International Longevity Centre (ILC)1 has provided more insight into the non-financial benefits of an ongoing relationship with a financial adviser.

The research confirmed that individuals who took advice were not only more confident about their financial future, but also appeared to be better prepared for retirement than those who didn’t. This was evidenced by the actions they had taken, including:

The report builds on earlier research by the ILC in 20192, which found that individuals who had received professional financial advice between 2001 and 2006 had achieved an average wealth boost of £47,706 across their accumulated pensions and other financial assets.

But the report also highlighted the continuing problem of the advice gap. Between 2014 and 2016, only one in six people took financial advice, underlining concerns about how many people are unprepared for the financial challenges of later life. 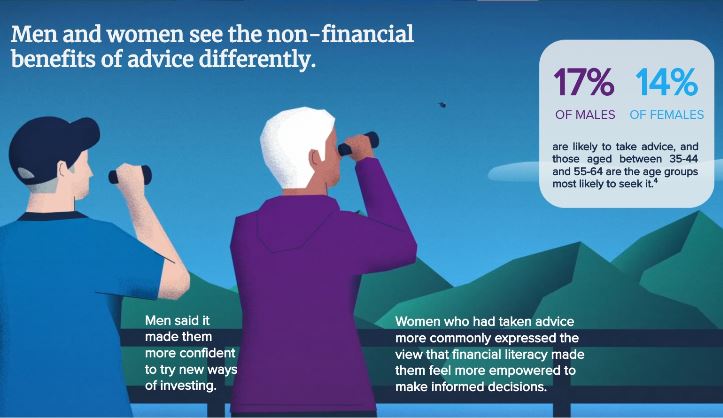 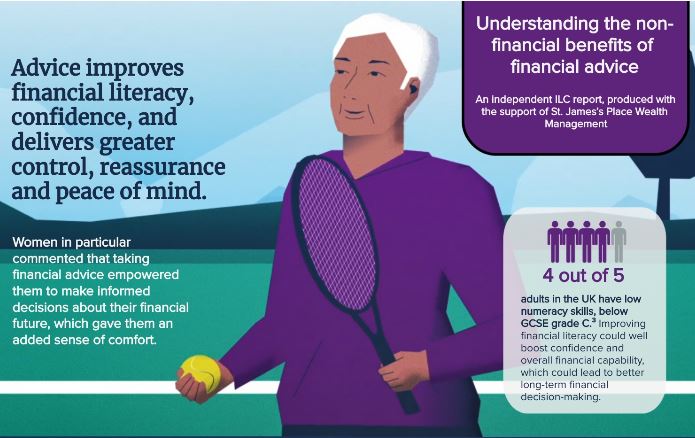 2What it’s worth – Revisiting the value of financial advice, November 2019 analysis by International Longevity Centre UK (based on 2014/2016 calculations)

Inflation may not seem like a big deal if you are working and earning an income that rises every year. But what about when you’re retired? If your savings aren’t growing, there’s not much you can do to preserve your purchasing power. That’s why it’s sensible to take professional financial advice. A financial adviser can help you invest your money with the aim of mitigating the impact of rising prices over time, meaning you can look forward to your golden years with more confidence.

“These findings show that we have an effective vaccine that will save many lives.”