“Despite the fact that deadlines have been missed over and over, we think it is responsible at this point to go the extra mile,” read a joint statement yesterday from European Commission President Ursula von der Leyen and UK Prime Minister Boris Johnson.

Details were thin on the ground as this week began, with no deadline set for this extension of the talks, and press reports suggesting they could go on until Christmas.

In markets, the most notable single effect of last week’s uncertainty was a decline in the value of sterling. As a no-deal outcome started to look more likely towards the end of the week, the pound fell by about 2% against the dollar. For investors in large UK companies, a temporarily weaker pound isn’t necessarily a bad thing, because many of the largest companies earn lots of their revenue abroad. The pound climbed on Monday this week in early trading.

There are clearly risks for sterling due to the ongoing talks, noted Chris Ralph, Chief Global Strategist at St. James’s Place. However, he also suggested that for the pound to fall to the lows seen earlier in the year, the trade negotiations would have to end messily, with a major disagreement.

Investors still expect a deal to take place, with many banks and fund managers still saying that a trade agreement is their base case scenario. However, they are cautious about the disruption that a failure to reach an agreement would cause. Capital Economics suggests that much of the market impact has been priced in by investors already, given the lack of distance between no-deal and deal caused by the path we’ve gone down in the last couple of years.

However, COVID-19 is still the largest driver of markets by far and will remain so even in the case of no deal, notes Mark Dowding of BlueBay Asset Management, co-manager of the St. James’s Place Strategic Income fund.

“The economic impact coming from this outcome is likely to still pale into insignificance compared to the result of the coronavirus,” he adds.

When it comes to predicting the future performance of UK equities, it’s important to remember that, by many metrics, UK companies appear to be undervalued. Richard Colwell of Columbia Threadneedle (manager of the St. James’s Place Strategic Managed fund) believes that UK equities are set to enjoy a resurgence. He says: “On many measures, the UK market is as cheap as it’s been since the ‘70s.”

The UK is undervalued compared to other equity markets, being packed with quality companies whose true values are higher than current prices, he argues. He points to events such as September’s purchase of William Hill by US gambling giant Caesars Entertainment. The fact that the deal took place in the middle of the COVID-19 pandemic, and with Brexit trade negotiations still ongoing, demonstrates that quality businesses are attractive to investors even in challenging environments.

Colwell adds: “There are prize assets available because we, the investment community, continue to be too timid and too bearish on the intrinsic value of UK stocks.”

While Brexit negotiations generated headlines last week, markets were also responding to the same forces that have been driving them throughout the year. Vaccine developments, COVID-19 cases, and economic data all had an impact on risk assets last week.

There was mixed news in the US, as jobs data and COVID-19 case numbers pointed towards the ongoing damage created by the pandemic. However, hopes also grew of an economic stimulus package being agreed in the near term.

US COVID-19 case numbers painted a less-than-rosy picture last week, reaching an average of 210,000 new confirmed cases per day, showing that the world’s largest economy has a long way to go in the battle against the pandemic. On the positive side, though, the rate of increase appeared to be slowing by the end of the week.

However, on Wednesday, the White House made a new fiscal stimulus offer to the Democrats, raising hopes that the much-needed funds will help spur the economic recovery. The parties have been agreed on the need for more stimulus for months but are gridlocked over its size and some of the conditions they want attached.

Meanwhile, the European Central Bank (ECB) announced at a meeting that it will extend its bond-buying programme by nine months and an additional €500 billion. The market reaction was fairly muted because the announcement was in line with investor expectations. The ECB programme is one of a series of similar measures by global central banks that have been crucial to supporting markets since the pandemic took hold in March this year.

Finally, last week saw an important milestone in the effort to control COVID-19, when a UK grandmother became the first person to receive the Pfizer/BioNTech vaccine. Margaret Keenan, whose 91st birthday is this week, said the jab was the “best early birthday present”.

Father Christmas might come down the chimney with presents, but some of the money parents spend on gifts for their children ends up going down the drain, according to new research commissioned by St. James’s Place.1

One in five gifts to children are expected to be wasted this Christmas, amounting to £760 million worth of presents that are unused, unwanted or thrown away across the UK each year.2

It’s unsurprising, therefore, that this Christmas almost 40% of parents are planning to give their children a present that has more longevity.3

A contribution into a Junior ISA or a child’s pension is a gift that can keep on giving.

An annual contribution of £365 to a JISA – equivalent to £1 a day – invested every year from birth could turn into over £11,000 on a child’s 18th birthday. Similarly, putting £5.50 aside every day from when a child is born until they reach the age of 10 (and assuming a 5% growth rate) could result in a pension pot worth £1 million by the time they hit 65.

These figures are examples only and are not guaranteed. What you get back will depend on how the selected investment grows and the tax treatment of the investment. You could get back more or less than this.

Parents and grandparents can not only be reassured that their money is not going to waste – but that it can have a real impact on the child’s life when they reach adulthood. A contribution to a Junior ISA could enable a child to put down the deposit on their first home or pay for university tuition.

It also benefits the environment, preventing unwanted gifts, packaging and wrapping from ending up in landfill.

But a financial gift doesn’t have to completely replace the traditional joys of Christmas giving.

“By investing some money for their future selves, whilst focusing on the toys they really want, children can get a head start in life and still feel the joy of receiving,” said Rob Gardner, Director of Investments at St. James’s Place.

Investment in a Junior Stocks & Shares ISA will not provide the security of capital associated with a Junior Cash ISA.

The favourable tax treatment of Junior ISAs may not be maintained in the future and is subject to changes in legislation.

All 39 external managers who look after the range of St. James’s Place funds are now signatories of the UN-supported Principles for Responsible Investment (PRI). This group encourages asset owners and managers to use responsible investment to better manage risks and seek opportunities, in the pursuit of long-term value in sustainable markets. This is an important step towards ensuring that our investments can help shape a future that protects the world we inherited, rather than endanger it. 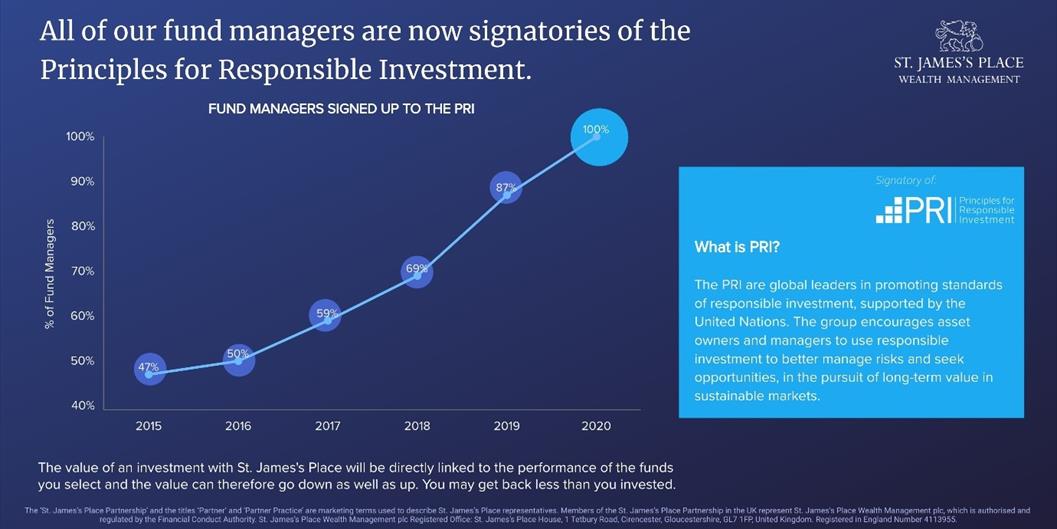 “Thinking differently about how money is spent on gifts for children this year can make a big difference. A small change this Christmas and throughout their childhood could be the difference between a playhouse today or a home of their own tomorrow.”