This is the last issue of WeekWatch in 2020. We’ll resume service on Monday 11 January. Until then, we hope that you and your families have an enjoyable, safe and restful break, and we wish you the best for next year and beyond.

Uncertainty made a comeback in the final week before the Christmas break, as the spread of a more infectious strain of COVID-19 in London and the South-East led to new restrictions over the festive period. Millions of people are now facing disrupted Christmas plans, or the prospect of not seeing their loved ones until next year.

Several European countries suspended passenger flights from the UK in response to news about the new strain, and France halted freight transport through the Channel Tunnel. Scientific advisers said that although the new variant is transmitted more easily, it is no more deadly than more familiar strains and there’s no reason to think it won’t respond to vaccines. Even so, there was a sombre mood in European and UK equity markets on Monday morning, with shares in the travel sector especially badly affected.

Meanwhile, after more deadline extensions than ever seemed endurable, Brexit trade negotiations had still not concluded at the time of writing on Monday morning. The uncertainty meant that the worst-case scenario of severe trade disruption was still a possibility.

Although the pound increased against the dollar last week, as headlines suggested that a deal was closer, it pulled back on Friday as the two sides failed to come to an agreement. By early on Monday morning, it had declined further. Investors can expect further market movements in the short term as news emerges about the talks.

For now, investors in UK companies should remember that UK equities are already trading at cheap valuations (see In the Picture below), partly because Brexit uncertainty has already been weighing on their share prices for some time. Of course, while trade disruption would be a hurdle for lots of companies, many of the UK’s largest businesses earn a significant portion of their revenue abroad. This helps to insulate them, to an extent, from the effects of a Brexit with or without a trade deal.

Despite the headlines generated by last week’s talks, the biggest driver of markets this year has been COVID-19, and the world’s response to it. Since March, there has been huge support around the world from governments (through stimulus packages and wage subsidy schemes) and central banks (with low interest rates and asset-purchase schemes). This support has increased investor optimism after share prices fell dramatically when the pandemic first took hold in the spring.

That’s why markets were paying close attention last week to events in Washington, where Democrats and Republicans reached a fiscal stimulus deal over the weekend. After the political deadlock ended, expectations that the $900 billion package would soon be agreed helped to drive US stocks to record levels again at the end of the week.

Positive news about vaccine developments has also helped lift the market mood towards the end of the year. Last week was no exception, with US regulators set to approve Moderna’s vaccine on an emergency basis. Meanwhile in the UK, the public roll-out of the vaccine saw it reach over 130,000 people during the opening days, with the elderly and front-line health workers receiving the jabs first.

“Santa this year is coming with a big syringe, and it’s the best gift we could get in this dismal 2020,” noted Gilles Moëc, Chief Economist at AXA Group. AXA Investment Managers manages the St. James’s Place Allshare Income Unit Trust. He added: “Still, the next few months will remain complicated.”

The complications are numerous. There’s still a risk that major economies could return to recession due to rising case numbers or further lockdowns. Similarly, governments might tighten up their fiscal policies with higher taxes, or the premature ending of their various support measures. Some people also fear a return of higher inflation, which reduces the value of cash savings.

Of course, the weekend’s news about the new strain of COVID-19 is another cause for uncertainty. Some analysts fear that it might lead to disruption around the world more widely, as it already has in the UK.

It’s impossible to know for certain whether any of these outcomes will occur. But investors can still look forward to 2021 with more optimism, now that the uncertainty of whether the world could create a vaccine has been eliminated, says Johanna Kyrklund, Group Chief Investment Officer at Schroders and manager of the St. James’s Place Managed Growth fund.

A broad economic recovery may also be a good thing for the cyclical stocks that have been outperformed by large technology companies, especially in the US.

“Overall, we’re positive on equities, because with a recovery on the horizon, we think it’s time to shift out of those stay-at-home stocks that have outperformed this year, and shift into more cyclical areas of the market.”

For investors, she added, this means that “It’s time to stop hibernating”.

A report by the Wealth Tax Commission made headlines last week after it revealed that a one-off, 5% levy on assets could raise £260 billion over five years, repairing the hole in the public finances created by the pandemic.

“This is a striking conclusion and comes at a critical juncture,” argued Lord Gus O’Donnell in the paper’s foreword.

Yet, despite the theoretical efficacy of a one-off wealth tax, Chancellor Rishi Sunak reiterated last week his reluctance to consider such a measure when balancing the books in 2021 and beyond.

Negative real interest rates mean that government borrowing is manageable over the medium term, negating the need for a drastic measure such as a wealth tax to restore the public finances in haste.

It would also be politically unpopular, particularly as the commission’s proposal for the levy to be applied to individuals’ personal wealth over £500,000 doesn’t just target the ‘super rich’, but middle-earners too, and those who are asset rich but cash poor. It would hit around 17% of the adult population, with the tax being paid in equal instalments over five years.2

However, Mr Sunak has stated that taxes will have to rise. Where may he look?

“This proposal could ease the path for increases to existing taxes on capital, such as Capital Gains Tax and Inheritance Tax,” suggested Alexandra Loydon, Private Client Director for St. James’s Place. “The chancellor may not like the idea of a wealth tax, but it could give him the political cover to introduce alternatives, particularly IHT and CGT on which he has already commissioned reviews.”

Reforming these taxes comes with its own set of challenges and brings to mind a saying, attributed to Winston Churchill, that a country taxing itself out of a recession “is like a man standing in a bucket and trying to lift himself up by the handle”.

“This uncertainty underlines the importance of advice, and how it can add value to your wealth by ensuring the appropriate use of current tax breaks, especially with the end of the tax year and a March Budget nearing,” adds Loydon.

UK stock prices appear to be undervalued, based on how many of them are trading at low price-to-earnings ratios. The chart below shows that, earlier in the year, the number of UK companies whose share price was less than ten times their earnings was at its highest level since the global financial crisis. 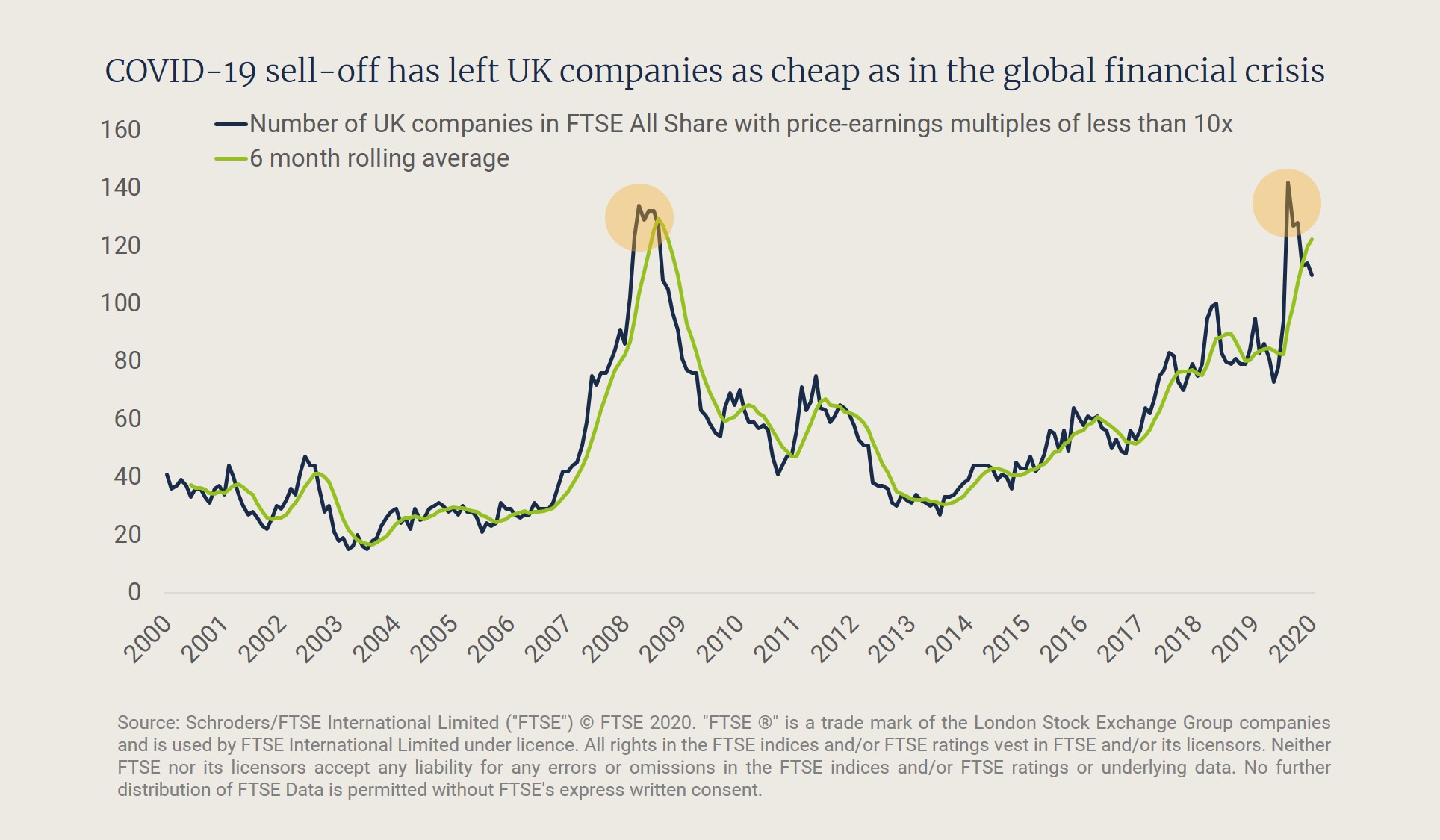 “What good is the warmth of summer, without the cold of winter to give it sweetness.”– John Steinbeck

FTSE nor its licensors accept any liability for any errors or omissions in the FTSE indices and/or FTSE ratings or underlying data. No further distribution of FTSE Data is permitted without FTSE’s express written consent.