President Trump’s term in office approached its end last week with a crowd of rioters sieging Capitol Hill. Although the episode ended in a few hours, it laid bare the tensions that have made the past four years so unpredictable.

The scenes were troubling to watch, but they don’t change the fact that the result of the election is clear. On Friday, Trump posted a video on Twitter conceding for the first time that Joe Biden will be the next president, adding that his focus was now on “ensuring a smooth, orderly and seamless transition of power”. However, when he later took to Twitter to state that he wouldn’t attend Biden’s inauguration, the social media company suspended his account permanently, citing the risk of incitement to violence.

Dramatic though the events on Capitol Hill were, they didn’t dent markets. In fact, all three of Wall Street’s leading benchmarks hit record highs the next day. News events like last week’s grab our attention when they are happening, but, for investors, what matters is the long-term horizon. What really matters over time is what impact Biden’s administration will have on markets.

Before November’s elections, market observers were weighing up this question. They focused on his campaign’s objectives around Big Tech, the environment, and the need to pump up support for the COVID-damaged economy.

Last week’s run-off Senate election in the state of Georgia raises that question again. The contest took place because none of Georgia’s candidates for the two seats in the Senate won more than half the votes in November. This time around, both Democrat candidates for the state won. Democrats now control both houses of Congress as well as the office of president (in what commentators call a ‘Blue Wave’). This makes it more likely that the administration will be able to achieve some of its goals.

What the ‘Blue Wave’ means for markets remains to be seen, due to the pressures that could constrain the Biden administration. Regulation of the energy sector, banks, and Big Tech might be watered down due to state-level opposition, suggests Mark Dowding of BlueBay Asset Management, co-manager of the St. James’s Place Strategic Income fund. In a similar vein, tax rises could also prove challenging. And, of course, the response to the pandemic could kick longer-term plans down the road.

“We would rather characterise recent events as more of a Blue Ripple than a Blue Wave,” suggests Dowding.

Markets began the year on a positive note, although Wall Street began the week with its biggest sell-off since October on nervousness over the Georgia election. Last week, the MSCI World Index surpassed its previous all-time high. The index measures the share prices of large companies around the world. UK markets also had a good week, with shares in its largest companies enjoying their best week since November last year, when there was the first news of vaccine breakthroughs. The story was similar for European stocks.

As the first week of the new year ended, the path towards normality – or something like it – was taking shape. Mass vaccination programmes are gathering speed. In the UK, 1.5 million people have been vaccinated, and Moderna’s vaccine has now been approved by regulators. Similarly, researchers announced last week that the vaccine developed by Pfizer and BioNTech works against variants of the virus that were discovered recently in the UK and South Africa.

Despite this good news, the human and economic costs of COVID-19 are still with us. Several European countries have put more lockdowns in place in response to rising cases. The US employment market is under pressure again, according to figures last week showing that it lost 140,000 jobs in December.

COVID-19 will continue to influence markets this year in lots of ways. Some seismic changes are already taking place in sectors such as e-commerce. Before the pandemic, around 20% of UK retail sales took place online, for example, but the figure is now around 40%, notes Keith Wade, Chief Economist at Schroders, a fund manager for St. James’s Place. He adds: “It’s brought forward the trend towards online shopping by about five years.”

With these changes already in motion, the coming year will be interesting to monitor. Within a diversified portfolio, your investments are well-prepared to benefit from economic changes such as these, and are better protected from market swings than if they were concentrated in one area. There will be bumps in the road in 2021, but thanks to recent strides made against COVID-19, we can look into the new year with optimism.

A new national lockdown on Tuesday marked the start of another uncertain year for self-employed workers in the UK.

“The self-employed are often more susceptible to an income shock than employed individuals, whether it’s because new contracts fail to materialise due to unprecedented nationwide or global events hitting the economy,” noted health and protection insurer, The Exeter.

The vulnerability of the self-employed has been exacerbated by the COVID-19 pandemic: 91% of freelancers say they are concerned about the financial impact of coronavirus on them and their business.1

Despite the financial insecurity felt by the self-employed, only one in ten self-employed earners have income protection, according to recent research by The Exeter.2

A lack of income protection – which pays out if you are unable to work due to injury or illness – can have short- and long-term consequences on several aspects of financial wellbeing.

More than half of respondents told The Exeter they would rely on personal savings if they suffered an abrupt loss of income.3

But perhaps more worryingly, the research showed that many self-employed workers are saving less than £50 per month, leaving them at risk if they have a mortgage to pay or a family to support.4

Over the longer term, the freedoms that many self-employed people usually enjoy need to be balanced against the downsides of no sick pay provision or company benefits, such as employer pension contributions and redundancy payments.

Fluctuations in both the amount and regularity of income can affect how self-employed earners build a pension.

Over 50% of self-employed workers surveyed feared their retirement income would be insufficient for their needs, and more than a third were worried their earnings could be hit through illness.5

“This is an incredibly difficult period of time for the self-employed community, and the myriad of uncertainties faced by freelancers and limited companies underscores the importance of income protection,” said Paula Read, Head of Protection Proposition at St. James’s Place.

“Our financial wellbeing can be improved by having the right cover in place should the worst happen at the wrong time. It’s a no-brainer, particularly for the self-employed.”

1Survey of 941 freelancers by IPSE (Association of Independent Professionals and the Self-Employed), January 2021. 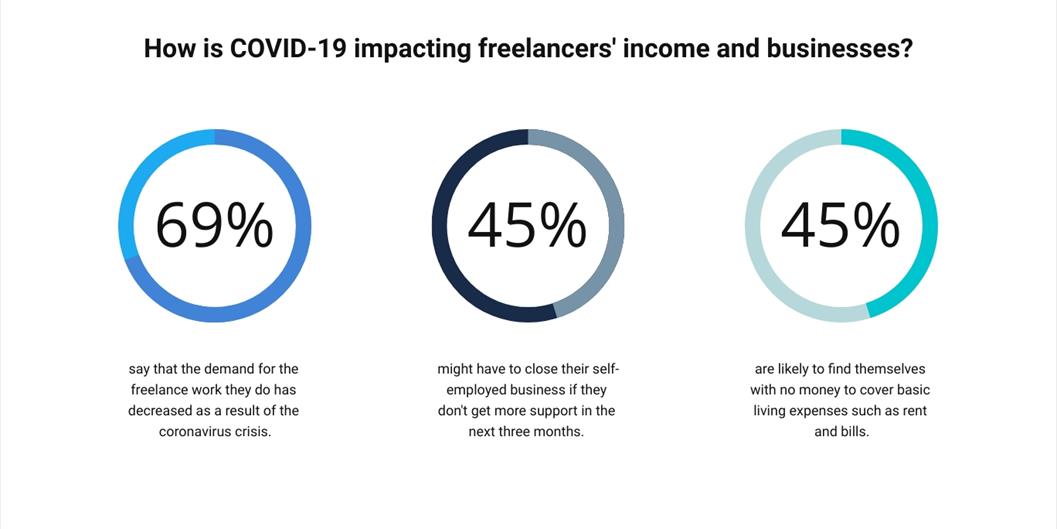 Looking back at 2020, one of the most striking changes for investors was the difference in performance between certain sectors of the market. Among large US companies, for example, traditional energy businesses have lagged. But large technology companies have enjoyed strong returns since the pandemic started. 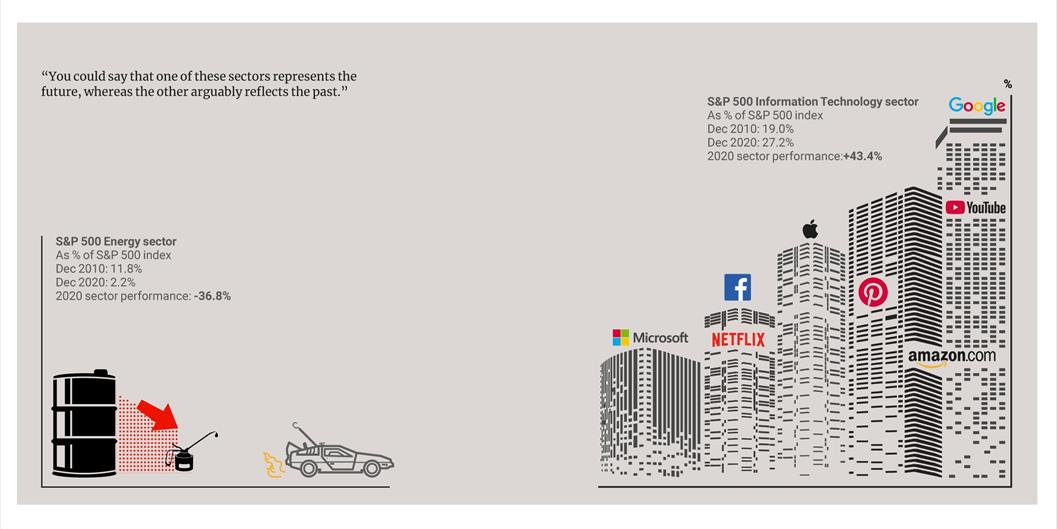 “It’s one of the few things we have ever agreed on.”

President-elect Joe Biden on his predecessor’s decision not to attend his inauguration this month.