Global markets slowed last week after a positive start to the year, as they weighed up news about the economic damage caused by COVID-19.

“The past week has been characterised by a loss of momentum in financial markets, following on the back of a couple of months of healthy returns,” wrote Mark Dowding of BlueBay Asset Management, co-manager of the St. James’s Place Strategic Income fund.

Despite recent progress against the pandemic, and the beginning of vaccine roll-outs across the world, there were several reminders last week that the road to normality will be long and bumpy. Last week, China recorded its highest one-day case numbers in more than five months. Meanwhile EU countries already struggling with slow vaccine roll-outs were dealt a blow by US drug giant Pfizer, which said it will delay some of its supplies from next week. And in France, a new evening curfew was implemented over the weekend, across the whole country.

In the UK, vaccination programmes are performing better than in Europe. There were also some early signs suggesting that recent restrictions are influencing case numbers. Government scientists put the ‘R number’ – or the rate at which the virus spreads – at 1.2, down from 1.3 last week.

However, cases are still high in many areas. Travellers from South America and Portugal were banned from entering the UK on Friday over concerns about a new variant of the disease, discovered in Brazil. New restrictions on all travel, including the closure of travel corridors, soon followed.

Meanwhile, the drama in Washington continued last week as President Trump was impeached for the second time. In a historic move, the House of Representatives charged him with inciting the mob of supporters that attacked the Capitol nearly two weeks ago.

Trump now faces a trial in the Senate. The timing of the impeachment means that the trial can only deliver its verdict after he has left office. If convicted, Trump could be prevented from holding the presidency or any other public office again.

Markets seemed unmoved by the impeachment news, just as they were during the riot the week before. They appear to be more focused on the longer-term impacts of the incoming administration. While the developments in Washington are unprecedented, investors have made the cold-blooded assessment that they aren’t as significant for investment returns as the economic backdrop.

On Thursday, markets pored over the details of a pledge from Joe Biden about the economy’s future. He promised in a speech that his government would provide an extra $1.9 trillion of public spending to support the economy, which includes a further $1,400 to all Americans (on top of the $600 that they have already received). He also repeated his campaign message about funding the stimulus with higher taxes on large companies. He added he would make sure that “everyone pays their fair share”.

Investors are hoping that the extra spending will support the US economy’s recovery in the coming months. High infection rates and worsening economic data are causing concern. Figures released last week showed that the number of people filing for jobless benefits rose by its biggest weekly figure since March. Meanwhile, on Friday, Wall Street stocks dipped after official figures showed that retail sales were lower than expected in December.

Looking ahead, the next few weeks will reveal more about how the world economy is recovering, as ‘earnings season’ gets going in earnest. Large public companies are about to release their earnings figures for the past quarter. In those reports will be many clues that investors can use to decide how well companies are coping with the pandemic.

Finally, the London stock market ended the week lower. However, it has enjoyed a good start to the year so far, which some market commentators are suggesting is due to the impact of the post-Brexit trade deal that was signed at the 11th hour last year. Recent figures for gross domestic product (GDP), released on Friday, showed that the economy shrank by 2.6% in November compared to the month before. However, the drop was lower than some forecasters had expected. This might be because businesses adapted better to November’s restrictions than they did in spring last year. Paul Dales Chief UK Economist at Capital Economics, said: “The economy has built up a fair bit of immunity to lockdowns.”

“Overall, we think that the UK market has the ingredients for better performance relative to other markets than of late,” said Adrian Frost from Artemis, which manages the UK & International Income fund for St. James’s Place.

He adds: “It would also appear that corporate fundamentals are much better than one would have feared just a few months ago. While Brexit may provide another leg higher for previously unloved value stocks, it should be good for UK equities as a whole.”

Three in four savers are on track to run out of money in retirement, according to a new report by The People’s Pension and State Street Global Advisors.1

The research highlights the risks savers face in retirement following the introduction of pension freedoms six years ago.

By offering greater flexibility and personal choice on how assets and savings are used during retirement, the reforms have made people far more responsible for their own retirement solutions.

But nine in ten people do not have a plan in place, putting it off because they fear the truth, according to The People’s Pension.2

Most people are making ill-informed choices and taking money out too quickly – but many were also found to have underestimated the impact of inflation on retirement savings, and how long they’re likely to live.3

“A significant number of people are sleepwalking into retirement and will have a worse quality of life in later years than could have been the case if they had been guided,” said Phil Brown, Director of Policy and External Affairs at B&CE, the provider of The People’s Pension.

Retirement can be complex and everyone can make poor choices. But financial advice means being fully informed to make better decisions.

“Not only will your St. James’s Place Partner help you to create a regular income plan that is personalised to you, they can also help you to avoid some of the pitfalls and the common mistakes that many people make along the way that could cause real problems in the future.”

Analysis of UK savings habits during the pandemic shows that higher-income households and retirees have boosted their savings; but many of those on lower incomes or unemployed are being forced to run down their reserves.1

What’s likely to happen to the savings accumulated by higher-income households? According to Bank of England research, 90% of them expect to pay off debts or boost pension savings. Only 10% say they will increase their spending.2 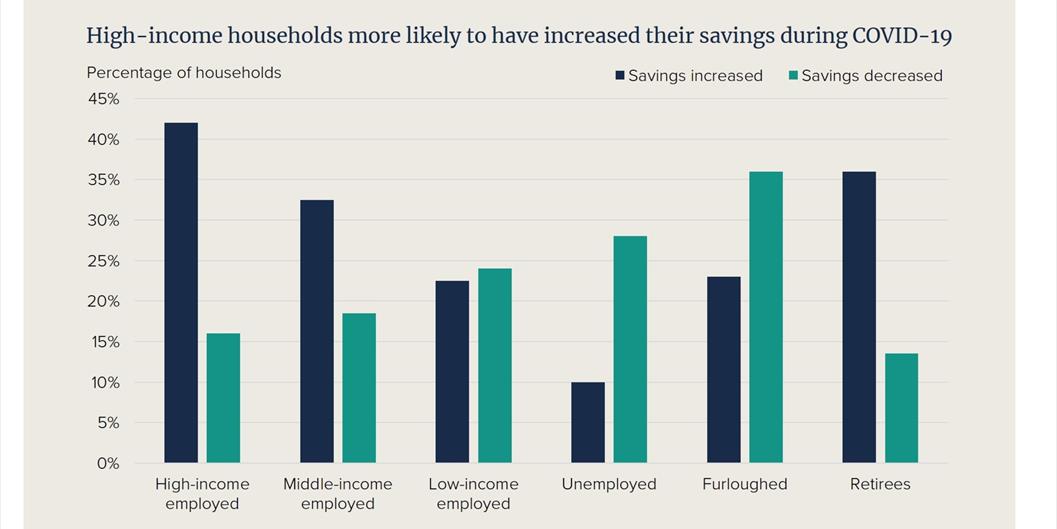 “The plan is to get the first 15 million most vulnerable people vaccinated with the first dose by the middle of February”.

Artemis and BlueBay are fund managers for St. James’s Place.