In his inauguration speech last week, President Joe Biden tried to put the recent violence on Capitol Hill firmly in the past. Calling for unity, he urged the States to move past the charged political climate that he called America’s “uncivil war”.

On his first day, he overturned several of Trump’s policies. He signed executive orders that will see the US rejoin the Paris Agreement on climate change, restore ties with the World Health Organization, and end the ban on citizens of Muslim-majority nations entering the US.

Global stocks rose after his inauguration, suggesting that markets are optimistic about the impact his term will have on the world economy. Perhaps the most important impact, at least in the near term, is his commitment to a $1.9 trillion stimulus package, which is planned to boost the country’s recovery.

Even so, the new administration will take some time to get its feet under the table, suggests Mark Dowding of BlueBay Asset Management, co-manager of the St. James’s Place Strategic Managed fund.

“We sense that those expecting very rapid progress with respect to the latest fiscal support package could be a little disappointed in the short term – even if more ambitious plans are building in the medium term regarding future initiatives on infrastructure spending, clean energy, the environment and other initiatives designed to deliver an agenda of transformation over the next few years,” he adds.

Chinese markets also had a positive week, after data showed that the country is leading the world in its economic recovery. Having dealt with the pandemic more swiftly, the economy is now surging back towards the growth rates that it enjoyed before the pandemic.

“China has been the only major economy to grow in 2020. Analysts are now busy revising forecasts of when China is expected to overtake the United States as the world’s largest economy to as early as 2026,” says Martin Hennecke, Asia Investment Director at St. James’s Place.

He points out that there are different ways of measuring the size of an economy. By the most commonly used version (called ‘nominal GDP’), then the US is the world’s largest economy. But if you use a measure that considers how expensive things are in different countries (something economists call ‘purchasing power parity’), then China’s economy is already larger.

“My personal take is that reality probably lies somewhere in-between, and that the two economies are of about equal size at present,” adds Hennecke.

Although they began the week quite positively, European markets were downbeat on Friday.

Lockdowns have taken a heavy toll on the region’s economic recovery, according to data released this week. Figures from IHS Markit showed that business activity in the UK, France and Germany is down compared to last month.

In the UK, for example, retail sales figures were released last week for the month of December. They show that sales were worse than expected – with the crucial month for retailers leading to an increase in volume of just 0.3% versus November.

Looking further ahead, there are some fears that the chancellor’s rumoured plans to hike the main rate of corporate tax could dampen the recovery. However, Capital Economics suggests that any rise would probably be offset by more government spending, meaning it wouldn’t make much difference to the economy.

Meanwhile, vaccinations in the continent are being held up. Pfizer has cut deliveries for the time being, due to delays, meaning that parts of Germany, Italy and Spain have had to suspend vaccinations. Although the long-term picture is much clearer, the short-term effects of the delays led to a dampened mood last week.

Focusing on the long term

It’s no secret that businesses are facing severe challenges. But those challenges create an opportunity for investors who are willing to look further ahead, writes Andrew Pastor from EdgePoint, which co-manages global funds for St. James’s Place.

“During periods of uncertainty, the time horizon of the average investor tends to shrink dramatically. As a result, we think investors today are placing too much emphasis on the near-term prospects of businesses. They’re ignoring many high-quality companies whose next three or six months might be uncertain, but whose next three-to-five years are highly predictable.”

He adds: “Short-term uncertainty has nothing to do with survivability or growth. We own businesses that we believe will not only survive, but will be much bigger in the future.”

Will he, or won’t he? Chancellor Rishi Sunak has reportedly rejected proposals for a one-off wealth tax on those with assets over £500,000, branding the idea as “un-Conservative”. The plan would have raised £260 billion – not far shy of what the government has spent so far on coronavirus support.

The news has stoked speculation about how and when the chancellor will take steps to plug the hole. The Budget on 3 March will be the first opportunity to find out. Alternative raids on wealth are still thought to be near the top of the list. A review last year by the Office of Tax Simplification proposed reforms to Capital Gains Tax, including aligning the rates to Income Tax levels and cutting the annual exempt allowance from £12,300 to as little as £2,000.

Such a move, if it happens, would further increase the appeal of tax-efficient wrappers such as pensions and ISAs as solutions to help build long-term wealth.

But Sunak has to tread carefully to avoid putting any economic recovery at risk. Last week’s retail sales figures highlighted how the economy still needs the government’s financial support.

As lockdown drags on, one of the few benefits is the opportunity it provides to spend time thinking about and planning our finances. With the end of the tax year on the horizon, and the Budget in just over five weeks’ time, it may be worth accelerating plans to take advantage of current tax allowances and rates. What seems certain is that taxes are only heading one way – the question is, how soon?

The levels and bases of taxation, and reliefs form taxation, can change at any time. The value of any tax relief depends on individual circumstances.

If you are putting off starting a pension, or unsure about whether to invest more into one, here’s why you shouldn’t delay. The effect of compounding returns is a powerful force in helping build the fund you need for a retirement that could last 30 years or more.

These figures are examples only and they are not guaranteed, they are not minimum or maximum amounts. What you get back depends on how your investment grows and the tax treatment of the investment. You could get back more or less than this. 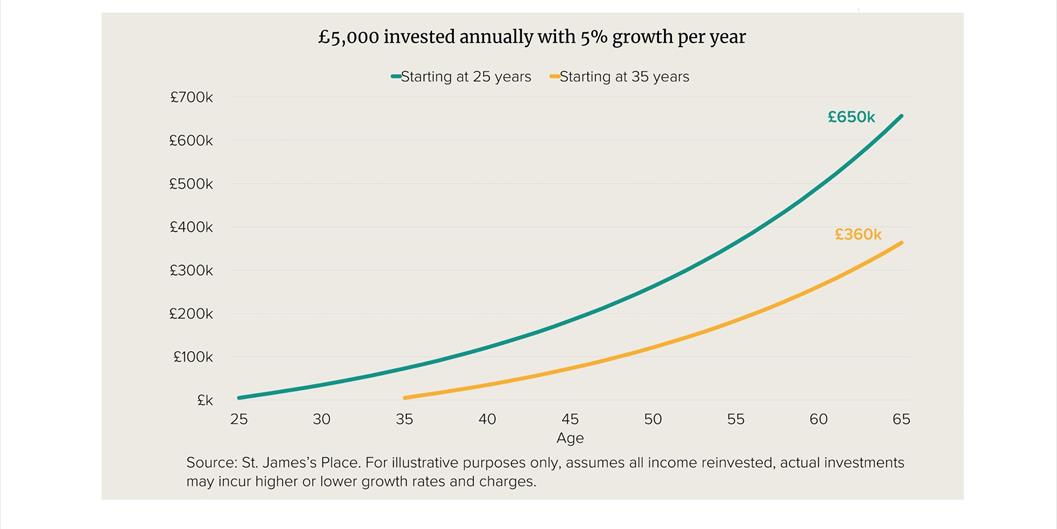 “We will press forward with speed and urgency, for we have much to do in this winter of peril and possibility.”

BlueBay and EdgePoint are fund managers for St. James’s Place.