As more and more people got vaccinated, world stocks had their best week since November last year. Although new strains of COVID-19 are concerning, the fight against the pandemic seems to be on the front foot.

Early data from Israel, for example, suggests that cases and hospitalisations are falling among vaccinated groups. The country is leading the way on jabs and its success is a cause for hope.

Markets were also steadier after the GameStop affair seemed to lose steam. The swings in GameStop’s share price, caused by an online army of amateur traders, had caused wider market ripples in late January. But as the stock settled last week, the noise around the issue seemed to be subsiding.

Figures also showed that there was a modest amount of job creation in the world’s largest economy over the last month.

A big year for Big Tech

America’s economic recovery was cited by Ruth Porat, the chief financial officer of Alphabet (Google’s parent company), as one of the reasons for the strong results it published last week.

In the three months of last year, Alphabet’s revenues increased almost a quarter to $56.9 billion compared to the same period in 2019.

The boost happened largely because Google’s business customers are beginning to spend more money on advertising again, added Porat. The last three months have seen a “broad-based re-engagement” across many industries, as companies start to plan for the future in a more optimistic way, she said.

Although the recent results are promising, the new administration in the US has said it wants to curtail the power of Big Tech. Some commentators think that this is a risk to large companies like Alphabet.

However, the strength of these companies’ business models means that investors should remain confident in their futures, says Hamish Douglass, co-founder of Magellan, which manages the St. James’s Place International Equity fund.

“Alphabet is one of the strongest business models the world has ever seen. A little bit of regulation is not going to kill this business. It’s going to come at some cost, but it’s a cost that’s well within the guardrails of where the share price is.”

In the UK, meanwhile, it emerged over the weekend that the Treasury is weighing up tax increases for technology firms and online retailers who have prospered during the pandemic.

It appears that these proposals are in their early stages, so it’s unlikely that they’ll appear in the upcoming March Budget if at all. However, the UK’s budget deficit may reach £400 billion this year, so the chancellor is trying to find ways to restore the public finances without hurting the economic recovery.

The success of online businesses during the pandemic has also caused their share prices to surge. Investors are now paying high prices to own shares in large technology firms. These large companies also account for a record proportion of the US stock market, having driven the growth of the S&P 500 index since March last year.

In such uncertain times, it’s comforting to own businesses whose future growth appears certain. However, it’s also unwise for investors to overpay to feel comfortable, writes Tye Bousada from EdgePoint, which manages funds for St. James’s Place.

Last week, Italy’s president asked the former head of the European Central Bank, Mario Draghi, to form a government, following the resignation of the former PM.

Draghi is an international political heavyweight, having led the eurozone through numerous crises. His immediate challenges at the top of Italy’s government are clear: the twin problems of COVID-19 and a serious economic crisis.

“Signor Draghi certainly comes with bags of credibility following his time at the ECB, although we are a little concerned that his character may be better suited to the role of a president rather than a PM,” wrote Mark Dowding of BlueBay Asset Management, co-manager of the St. James’s Place Strategic Income fund.

“During his tenure at the ECB, Draghi had a relatively singular leadership style. However, as a prime minister of a government propped up by multiple parties and factions, there will be a need to build consensus and bring others with him. This may stymie some of what Draghi may want to get done and create an environment where clashes could be inevitable.”

Last year’s market shocks were a reminder of just how emotional investing can be. Because our investment objectives are often attached to life goals or future plans, severe market falls can seem to put these in jeopardy, causing stress and worry that can feel overwhelming.

How secure we feel about our financial futures and our everyday expenses shapes our financial wellbeing, according to a recent study by Schroders.

The asset manager found that, for the majority of people, financial wellbeing is defined not by high levels of wealth but the freedom that comes with not having to worry about money.1

While most of those surveyed had resilient household finances, a lack of longer-term financial planning was found to be impacting peoples’ financial wellbeing as they worried about the future for their families and themselves.2

Worryingly, those nearing retirement said that their lack of confidence in managing their money was affecting their ability to enjoy life, with almost one in six regularly or occasionally experiencing stress over their financial situation.3 Just 37% said they were on course to retire with enough money.4

Just as insecurity or worrying about the future can be detrimental to our wellbeing, financial planning can help boost wellbeing. Over a third of those surveyed identified that having a sense of control and foresight over finances could improve their confidence, and other areas of wellbeing.5

The peace of mind that comes with financial wellbeing is invaluable. Financial advice can help you achieve it.

The world passed a milestone in the fight against COVID-19 last week, when the number of people vaccinated surpassed the total number of confirmed cases. Optimism about the world’s recovery seemed to be a driving force in markets last week. 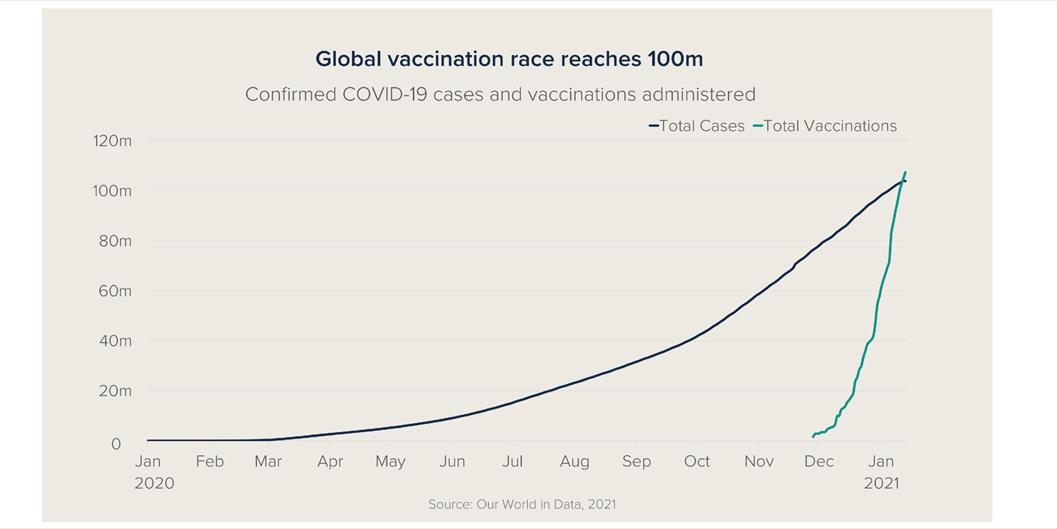 Keep inventing, and don’t despair when at first the idea looks crazy. Remember to wander. Let curiosity be your compass. It remains Day 1.