Last week, Chinese stock markets briefly rose above their all-time high. Fresh from the Lunar New Year break, investors pushed the CSI 300 Index of Chinese stocks to levels not seen since 2007 – although it later settled below that point.

China’s economy has been going from strength to strength ever since the epidemic was brought under control last year, notes Martin Hennecke, Asia Investment Director at St. James’s Place.

“While a key driver of the initial rebound was the strong exports, local consumption has been catching up lately, too, with shopping malls well attended and cinemas packed. China’s box office for the 2021 Spring Festival reached over 7 billion yuan – a new record, which has provided investors with confidence as well,” he said.

“That said, I would also highlight that, with valuations having increased in the process, particularly in the more popular sectors – healthcare, technology, and electric vehicles – investors may need to become more selective on stock picks at this point.”

Japanese stocks also recorded a strong week (see In the Picture below), when the country’s flagship Nikkei 225 index of companies reached a level that it last hit in 1990. Market commentators believe that the recent resurgence in Japanese stock prices is partly to do with the broader optimism in equity markets, as well as positives signs about its economic recovery.

The pause appeared to be partly to do with fears that Joe Biden’s $1.9 trillion stimulus package might lead to higher inflation. The president promised last week that the economy would come “roaring back” after Congress approves the package.

Central banks like the US Federal Reserve, or the Bank of England, tend to increase interest rates when inflation rises too high. Higher interest rates lead to higher borrowing costs for people and businesses, which in the long run can lower stock prices.

However, it seems unlikely that central banks will tighten policy any time soon. Markets are currently pricing in a first hike in US interest rates in the middle of 2023, noted Mark Dowding of BlueBay Asset Management, co-manager of the St. James’s Place Strategic Income fund.

Last week, sterling rose to $1.40 against the US dollar for the first time since 2018. The pound has had a strong start to the year, partly due to the post-Brexit trade deal signed late last year, but also due to the success of the vaccine rollout programme in the UK.

Many large companies in the UK derive much of their income from abroad, which means that they often stand to benefit from a weaker pound. For investors in UK equities, the pound’s value is less important than the underlying health of these companies, as well as their future prospects.

Although currency traders seem optimistic about the UK’s immediate future, it’s clear that the road to recovery will be a long one. Official numbers showed on Friday that UK manufacturing slumped last year, and that the latest national lockdown hurt retailers in January.

However, following pressure from industry groups demanding a ‘road map’ out of lockdown in the UK, over the weekend it emerged that the prime minister is set to reveal a four-part plan to lift the restrictions. Early signs are that schools will reopen in early March, and outdoor gatherings and sports will be allowed again towards the end of March.

Has the game stopped?

Finally, the key actors in the GameStop saga were hauled in front of the US Congress last week.

Lawmakers were seeking to understand why Robinhood, a popular stock-trading platform, halted the trade of GameStop after its price rocketed skyward following online discussions about it. They also wanted to understand the phenomenon of amateur investing, by exploring any dangers about the ‘gamification’ of trading, or whether online discussions about stock prices could be considered market manipulation.

The episode has highlighted the growing influence of amateur investors on the stock market. The issue reverberated around the wider market when it peaked late last month and caused an increase in volatility.

Last week’s hearing was also striking for bringing together two quite different groups: politicians on one side, and online forum users on the other. In his testimony, a popular YouTuber who goes by the persona ‘Roaring Kitty’, whose video analysis of GameStop helped spark the phenomenon, said to Congress “I am not a cat” – a clarification that has probably not been needed before in the chambers of Capitol Hill.

The rise in inflation to 0.7% in January1 pales in comparison to the jump in prices expected by the end of this year. Economists forecast that inflation could breach 2% by the end of the year2, as the recovery gathers pace on the back of a successful vaccine rollout, and higher production costs are passed onto the consumer. What’s more, it’s likely the Bank of England will prioritise supporting economic growth over reducing inflation for the next few years.

The news will be another blow to cash savers, dropping their real returns further into negative territory. The average interest rates on savings accounts fell again last month, according to Moneyfacts, including those for Cash ISAs.3 This dashes the hopes of savers ahead of ‘ISA season’ – the period in the run-up to the end of the tax year when ISA providers traditionally up their rates to attract savers who haven’t used their allowance.

Indeed, the outlook for inflation and interest rates, coupled with the looming 5 April deadline, might be the trigger to review whether your ISA savings could be working harder. Over £280 billion is sitting in Cash ISAs4, and much of that money will have been there for more than five years. If so, that means cash has become part of savers’ longer-term investment strategy, rather than just the home for ‘emergency’ money. It also means savers may be wasting the opportunity provided by their ISA allowance to generate inflation-beating returns and keep future financial plans on track.

The value of an ISA with St. James’s Place will be directly linked to the performance of the funds selected and the value may fall as well as rise. You may get back less than the amount invested.

An investment in a Stocks & Shares ISA will not provide the same security of capital associated with a Cash ISA.

The favourable tax treatment of ISAs may be subject to changes in legislation in the future.

Japanese stocks followed world equity markets higher last week, reaching levels that they last hit three decades ago. The country launched its vaccination programme last week, with hopes that the delayed Summer Olympics might be able to go ahead normally this year. 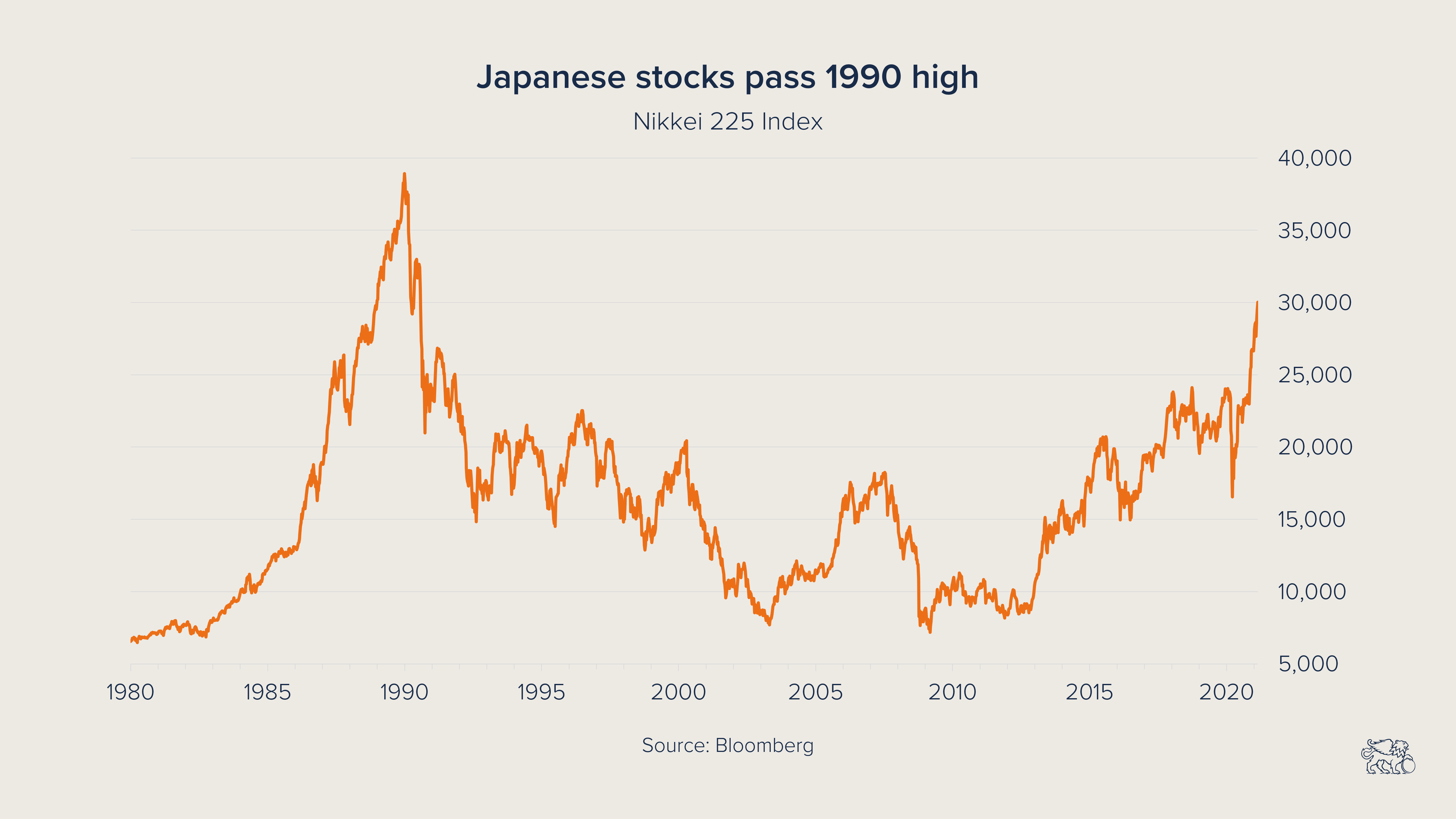 “These results are very encouraging, and have given us great reasons to be optimistic for the future.”