Over the past couple of years, fast-growing technology stocks have significantly outperformed the rest of the market. Since the pandemic took hold last year, ‘stay-at-home’ stocks that saw their earnings grow during lockdowns also enjoyed further share price growth. However, since successful vaccine developments were announced last year, stocks in other sectors favoured by ‘value’ investors have enjoyed a resurgence.

Last week’s change may be a sign that the tearaway growth of Big Tech has paused for a while, suggested Jim Henderson of Aristotle, which manages the St. James’s Place North American fund.

“That train seems to have slowed,” he said, pointing out that last week’s movements in US stocks seem to be in line with that trend.

“There certainly does appear to be a continuation of the growth/value rotation that started late last year. In February, the value benchmarks have outperformed the S&P 500 by some 350 basis points [3.5%],” he added.

For investors, of course, the best approach is to maintain a well-diversified portfolio. If your funds are invested in assets on both sides of the rotation, then their performance won’t be reliant on whichever style of investment is popular from month to month.

Some of last week’s market movement seemed to be related to the prospect of higher inflation. Markets appear to be weighing up a future in which a quick economic recovery after COVID-19 leads to higher inflation, and interest rates are increased in response.

Last week, the chair of the Federal Reserve addressed concerns about inflation in a meeting with Congress. Downplaying fears that inflation might shoot up later in the year, he said that the central bank would maintain its high level of support for the US economy, which has helped boost stock prices since it was implemented last year.

“The market is focused on inflation, both the good and the bad of it,” noted Dan O’Keefe of Artisan Partners, which manages funds for St. James’s Place.

A higher-inflation environment affects stock prices in different ways, he noted. A rapid economic recovery would be good for certain ‘cyclical’ stocks, while higher interest rates are positive for the financial sector.

“In this environment, our financial holdings such as BNY Mellon and Citi should benefit strongly. Modest inflation along with economic recovery would also be positive for many of our names such as American Express, Expedia, Booking.com and Southwest Airlines, for example.

“On the other hand, the end of the low interest rate and low inflation environment would arguably be bad for the high-priced growth stocks that have led the market for several years now,” he added.

The road to higher interest rates?

Inflation is also under discussion in the UK, as the market speculates on when the Bank of England might start to raise interest rates in expectation of a post-COVID spending boom. The futures market is pricing in a first increase in the second half of 2022, and up to +0.75%-1.00% in five years’ time.

However, Capital Economics believes that interest rates will stay at their current record-low rate (+0.10%) for the next five years. It argues that higher inflation will be short-lived, perhaps fading in 2022, and that the Bank’s ability to loosen monetary policy will be curtailed by government spending. Whichever forecast proves right, it is a long and difficult road ahead for those reliant on cash savings.

Markets are forward-looking, so much of last week’s change in the share prices of US technology companies was to do with estimating what the world will look like many months in the future. In the nearer term, though, things are looking a little brighter thanks to the government’s ‘roadmap’ for easing the current lockdown in the UK.

Speaking last Monday, Boris Johnson announced a four-stage plan to loosen the current restrictions in the UK. There are some early signs that people have jumped on the opportunity for life to return to normal (see In the Picture). While markets adjust their outlook in response to the changing landscape, the most likely scenario is that life is about to improve soon for most people.

We haven’t got long to wait to hear Chancellor Rishi Sunak’s plans to revive the UK economy and meet the huge cost of its pandemic support. As Wednesday’s Budget nears, attention has again turned to whether any major tax changes to savings and investments will be announced. It’s anticipated that more radical or complex moves will be pushed back to a second Budget later in the year. This view was strengthened by news that the government will wait until the end of March to publish several tax consultations, suggesting the chancellor is serious about boosting revenues in the future.

However, it was reported last week that Sunak has more immediate plans to freeze the lifetime allowance1 – the maximum amount of benefit that can be drawn from pension schemes without triggering an extra tax charge. The allowance in this tax year is £1,073,100 and the move could raise £250 million a year by 20242.

What seems clear is that the tax regime for investments and pensions will not become more generous. If that proves to be the case, making the most of your tax allowances before the end of this tax year makes even more sense. Speculation continues over the future of pension tax relief, underlining the importance of higher rate and additional rate taxpayers putting as much as they can afford into their pension.

Capital Gains Tax (CGT) is not covered by the government’s triple lock pledge on Income Tax, National Insurance and VAT, so could be adjusted to increase revenues. That could be through closer alignment of Income Tax and CGT rates, or a reduction in the annual allowance from its current £12,300. In its review last year, the Office of Tax Simplification recommended it should be cut to somewhere between £2,000 and £4,000.

With 25 working days to go until the end of the financial year, there are many valuable tax-planning actions to consider that can take you a step nearer your goals.

Last week’s announcement about the relaxation of lockdown measures offered a glimmer of hope to the tourism industry. The more likely prospect of international travel this summer is good news for companies that have been badly affected by the pandemic, such as airlines, hotels and hospitality. 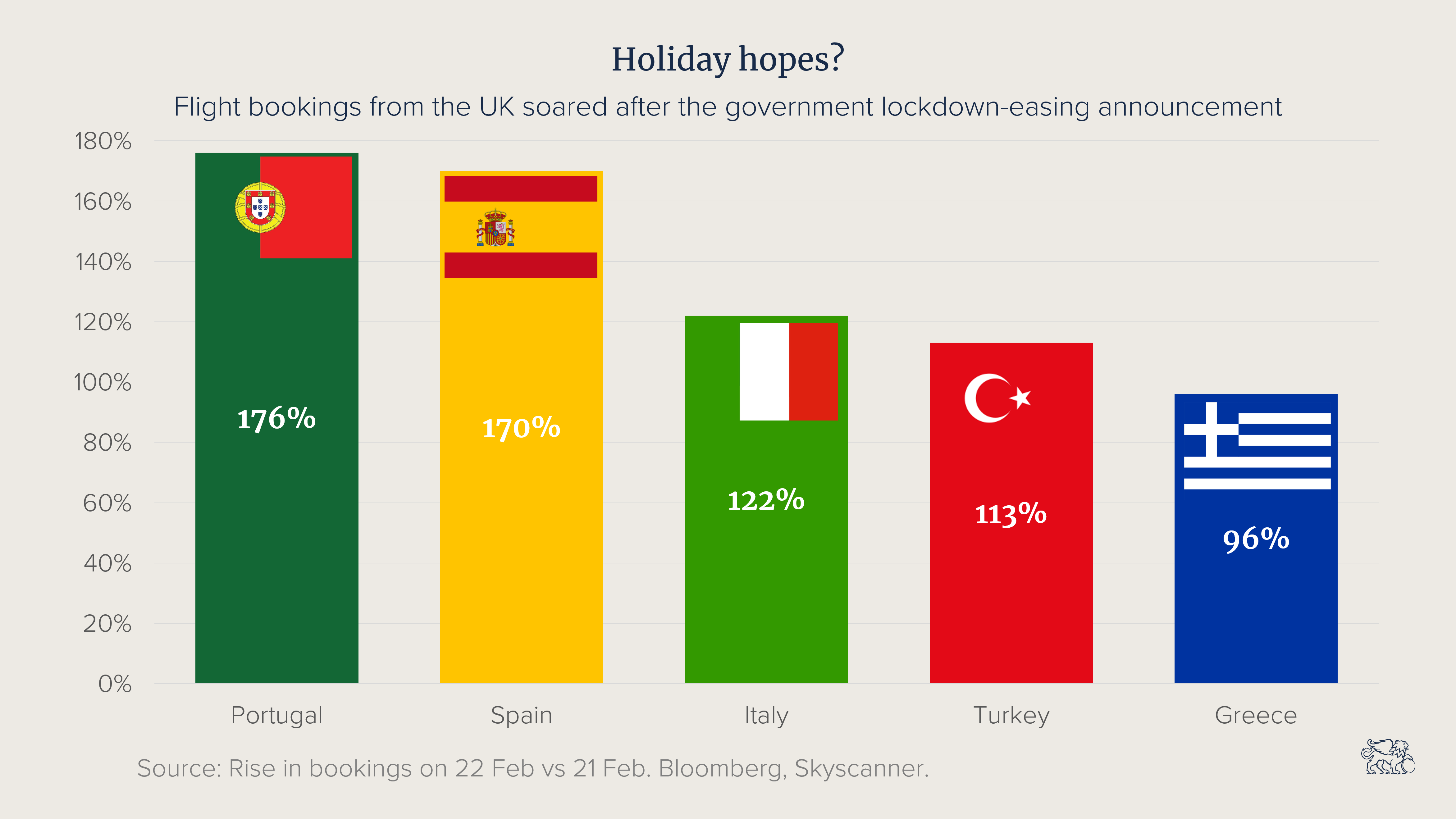 “In the short-term, we need to protect the economy and keep supporting it through the roadmap, and over time what we need to do is make sure our public finances are sustainable.”

Chancellor Rishi Sunak tells Andrew Marr about his priorities ahead of an important Budget.

Aristotle and Artisan are fund managers for St. James’s Place.