“There is a sense of waiting for markets to come back to life at the start of September,” wrote Mark Dowding of BlueBay Asset Management, co-manager of the St. James’s Place Strategic Income fund, after a relatively quiet week in global markets.

The quiet week may reflect investor hopes about COVID-19. While the threat of a second wave is still present, many countries seem to have dealt effectively with the pandemic using lockdown measures. Although case numbers are rising in certain hotspots, investors seem optimistic that they’re being contained.

“Despite daily data on infection numbers, there is now a sense that we have become used to living with this. At the same time, mortality rates continue to drop, as treatments become more effective and the virus shows signs of mutating into a less deadly form. Healthcare systems are far from overwhelmed and in many countries, hospitals are sitting eerily quiet,” noted Dowding.

This sense of optimism helps explain, among other reasons, why the US stock market reached its highest ever point last week. Just a few months after its plummet in March, the S&P 500 index has recovered its losses to reach an all-time high.

Even so, there are still reasons to be cautious. For example, some investors are worried that the exuberance in global stock markets doesn’t reflect the health of the world economy, which is still reeling from the outbreak. And the recovery in share prices has also been very mixed – while large tech companies have responded well, lots of traditional businesses are still struggling.

There are also several events that might begin to unsettle markets soon, after the brief summer lull. One is the lack of progress in trade talks between the UK and the EU, which resumed last week but failed to break the logjam. Time is running out to get the deal done.

Another factor is the looming US election race, which will soon enter its final phase. As the November 3 date approaches, there’s an increasing chance of the race causing market-moving events. In a sign of the battle heating up, last week saw Trump claim incorrectly that the House Speaker Nancy Pelosi would become President if the election result is delayed due to mail-in voting.

Finally, economic data released last week revealed a mixed bag of news about the world recovery. The world’s advanced economies are at different stages of dealing with the virus, but those countries that implemented job retention schemes (like in Europe and Japan) can soon expect unemployment to rise, argues Capital Economics.

“The bottom line is that, with labour markets weakening, the so-called “easy” part of the recovery is probably reaching an end”, it suggested.

This is not just adapting, this is M&S adapting

Among its many effects, the COVID-19 pandemic has sped up pre-existing trends. In other words, many businesses were already changing how they operate, but, due to the virus, they’ve had to change much faster.

One of those businesses is UK retailer Marks & Spencer (M&S), which revealed last week that it will be cutting another 7,000 jobs over the next three months. The company is one of many retailers to announce redundancies due to falling sales in its physical stores.

Shopping habits were already changing before the pandemic: the ‘death of the high street’ is a well-worn phrase in British journalism. But the national lockdown, plus consumer fears about catching the virus, has made many people spend more money online in recent months. The increase in online shopping is one reason why UK retail spending, according to data for July released last week, is above pre-pandemic levels, adds Capital Economics.

M&S has been trying to boost online sales for some time. Back in February 2019, it bought 50% of online supermarket Ocado’s delivery arm, in order to reach more customers through its network. That tie-up begins next month – and may prove an example of a business having effectively predicted a consumer trend.

So, while the future of retail spending is still uncertain, the companies that do best in the next few months and years will be ones that adapt well to the ‘new normal’.

Things are also changing fast in the world of fund management. The people and teams that manage St. James’s Place funds have been adapting to the demands of the pandemic in a range of ways.

Schroders, which manages several funds for St. James’s Place, has generated headlines this week for its forward-thinking approach to flexible working.

Rather than tell fund managers and other employees that they can work from home a certain number of days per week, Schroders has taken a “principles-based approach” that allows each team to decide what’s best for them.

“In practice, our fund managers will be combining working from home with coming to the office. As with most things in life, extremes are rarely practical”, says Joanna Kyrklund, Schroders’ Chief Investment Officer.

To expect the unexpected is just one lesson we have learned from the pandemic. It’s also taught us the importance of having adequate plans in place in case things go wrong.

A new study by Co-op Insurance¹ suggests that COVID-19 has already impacted the retirement plans of almost a fifth of over-50s. A quarter of those said they’ve been unable to retire when they’d planned due to their finances, while some have had to dip into their retirement savings early.

Over a quarter of respondents felt they needed to make up for time lost due to the pandemic. Indeed, over a third of over-50s said they now intended to retire sooner to give them more time to enjoy life.

That’s a great plan, but only realistic if you’ve got a big enough retirement pot in place.

For future generations of retirees, the financial impact of the pandemic has underlined some vital principles: make sure you have a sufficient emergency fund; save earlier; and save more into your retirement fund.

¹ Research was carried out on behalf of the Co-op by Atomik research among 2000 UK adults aged 50 and over.

Joe Biden formally accepted the Democratic presidential nomination last week and is currently favourite to win the election. Investors might see markets become more volatile ahead of 3 November, but what’s happened in the run-up to past elections? 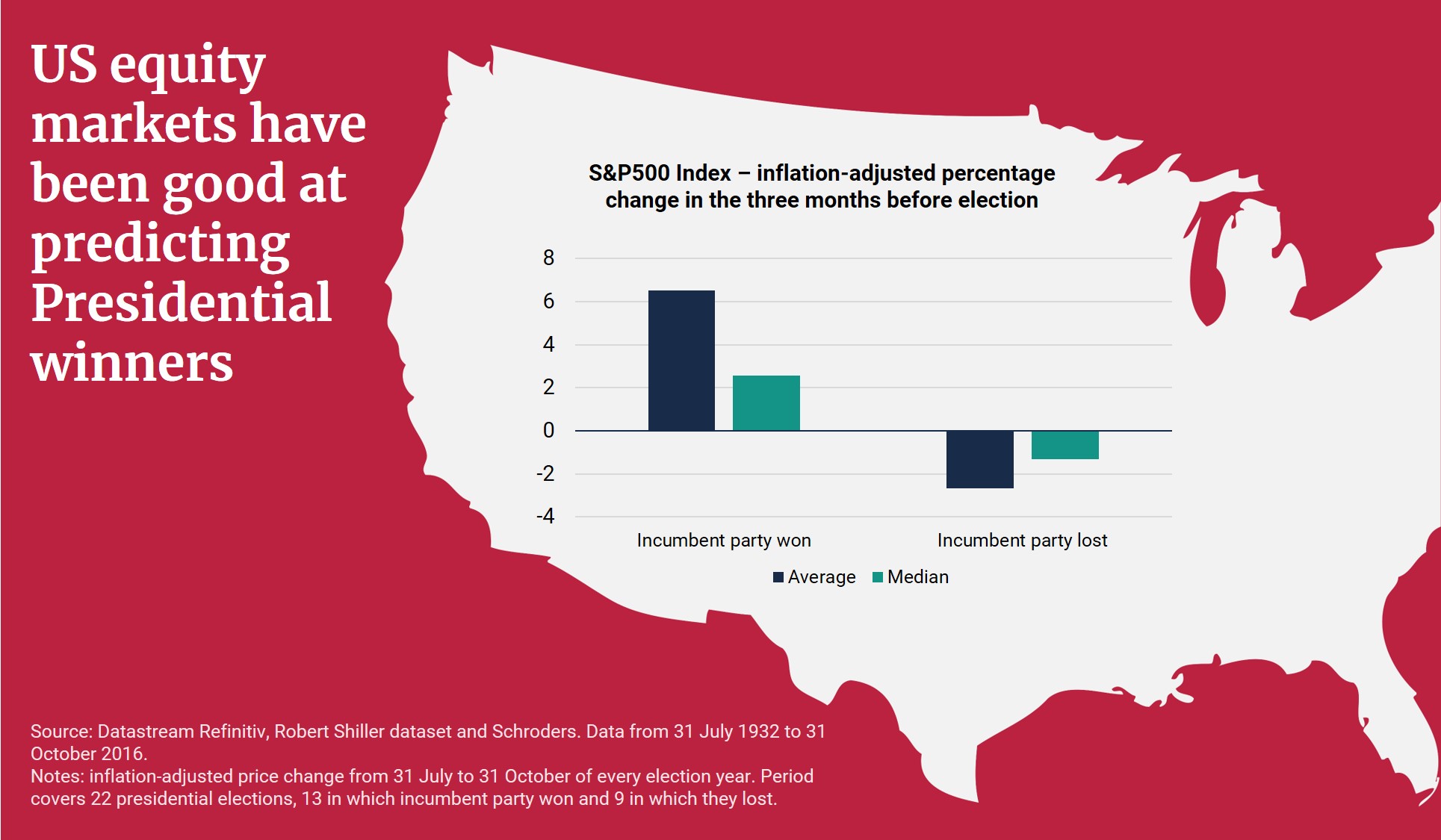 “We do not have a zero sum approach to prosperity, and especially in times like this, we’re focused on growing the pie, making sure our success isn’t just our success.”

FTSE International Limited (“FTSE”) © FTSE 2020. “FTSE®” is a trade mark of the London Stock Exchange Group companies and is used by FTSE International Limited under licence. All rights in the FTSE indices and/or FTSE ratings vest in FTSE and/or its licensors. Neither FTSE nor its licensors accept any liability for any errors or omissions in the FTSE indices and/or FTSE ratings or underlying data. No further distribution of FTSE Data is permitted without FTSE’s express written consent.
© S&P Dow Jones LLC 2020; all rights reserved