US stocks ended the week at new highs after a volatile few days that saw a continuation of recent moves in equity markets.

The S&P 500 Index of large US companies closed the week higher, but underneath the surface there were large ups and downs in the share prices of specific companies. Over the past few weeks, some investors have stepped back from large US technology companies, instead favouring so-called ‘cyclical’ stocks that stand to gain most from the expected economic recovery.

European stocks ended the week higher, despite fears of a third wave of COVID-19 in parts of Europe. Belgium reintroduced strict lockdown measures last week in response to rising case numbers. Chancellor Angela Merkel reversed plans to put Germany under another lockdown over the Easter holiday. She also took the unusual step of apologising to the nation for the uncertainty.

Meanwhile, the latest economic data seems to be showing that the UK economy is performing better than expected. With the most recent lockdown set to wind down gradually over the coming weeks, data are showing that employment and the public finances have been resilient this year. On Friday, a Bank of England official said that the UK’s GDP figure for the first three months of the year will probably be higher than the estimate it provided in February.

For investors in the UK, the likelihood of a faster economic recovery is broadly positive. It lends more weight to the idea that the relative prospects of UK equities are bright, especially when compared to more expensive parts of international markets such as US technology stocks, for example.

While markets were generally upbeat on the Continent, in Turkey they reacted badly to news that President Erdogan had fired the country’s central bank governor. The president appeared to have sacked Naci Agbal over his decision to raise interest rates – making him the third Turkish central bank governor to have lost the job in the past two years. The country’s stocks, bonds, and currency fell on the news, as investors reduced their exposure to the country.

The sudden change “serves as a reminder of the risks and also the opportunities to be had in emerging market-related assets,” noted Mark Dowding of BlueBay Asset Management, co-manager of the St. James’s Place Strategic Income fund.

However, he also noted that bond returns are low in many developed markets. Similarly, certain pockets of the equity markets in developed countries are at expensive levels, which means that investors should still consider the role that emerging markets could play in their portfolios.

“We believe that it continues to be attractive to identify opportunities, particularly at a time when prices may be falling for no fundamental reason and may just be repricing on contagion fears,” he added.

As the events in Turkey demonstrate, uncertainty created by political issues is one of the key risks in emerging markets. However, it is also an increasingly important factor in the relationship between the US and China. As the world economy begins to reopen thanks to the success of vaccine programmes, the relationship between the world’s two great powers is once again near the top of the list when it comes to market-moving events.

Last week, the share prices of large Chinese technology companies dipped after news that US stock exchanges might remove some of them from their lists. On Wednesday, the US financial regulator said that foreign companies listed in the US will have to open their books to auditors in order to have their stocks bought and sold in the country.

China’s biggest companies have tended not to do so in the past, which raises the prospect of the financial systems of China and the US heading further apart. The new rules were signed into law by President Trump at the end of his term, but there is cross-party support in Washington for the tough stance, which means that similar disputes are likely in the future.

After much conjecture about possible tax changes affecting personal finance, last week’s so-called ‘Tax Day’ turned out to be something of a non-event.

On Tuesday, the Treasury released a number of tax-related consultations to follow up the Budget, but resisted key reforms to Capital Gains Tax (CGT), pensions tax relief and Inheritance Tax (IHT) that had been the subject of previous consultations and recommendations.

A report published last year by the Office of Tax Simplification (OTS) proposed material changes to CGT and suggested that revenue could be doubled if rates were brought into line with Income Tax. This followed a challenge from the Public Accounts Committee over whether the cost of pensions tax relief – nearly £40 billion in 2019/20 – was effective in encouraging all taxpayers to save for retirement.1 But the government has chosen not to explore these revenue-raising options… for now.

However, there was confirmation that IHT rules are to be simplified later this year, which should mean that, from January next year, over 90% of estates not liable for IHT will be spared having to complete tax paperwork when probate (or ‘confirmation’ in Scotland) is required.2

However, IHT remains a tax that is unpopular and the cause of much confusion – a view confirmed in the review of IHT by the OTS in 2018/19.

Eddie Grant, tax specialist at St. James’s Place, believes that IHT is outdated and in urgent need of overhaul. “A lot of the IHT allowances and exemptions came in during the 1980s. For example, if the annual gifting allowance of £3,000 had increased with inflation, it would now be around £11,900.”

For now, though, those concerned about maximising the wealth they pass down to their family should urgently consider using the opportunities that are available in the remaining few days of this tax year.

A new survey from YouGov reveals that 32% of people have increased their savings since the UK’s first lockdown, and the average amount saved for those who have benefited is £4,500. While some people plan to spend some of that windfall, it’s important to consider the various tax-efficient ways that money could be invested instead. 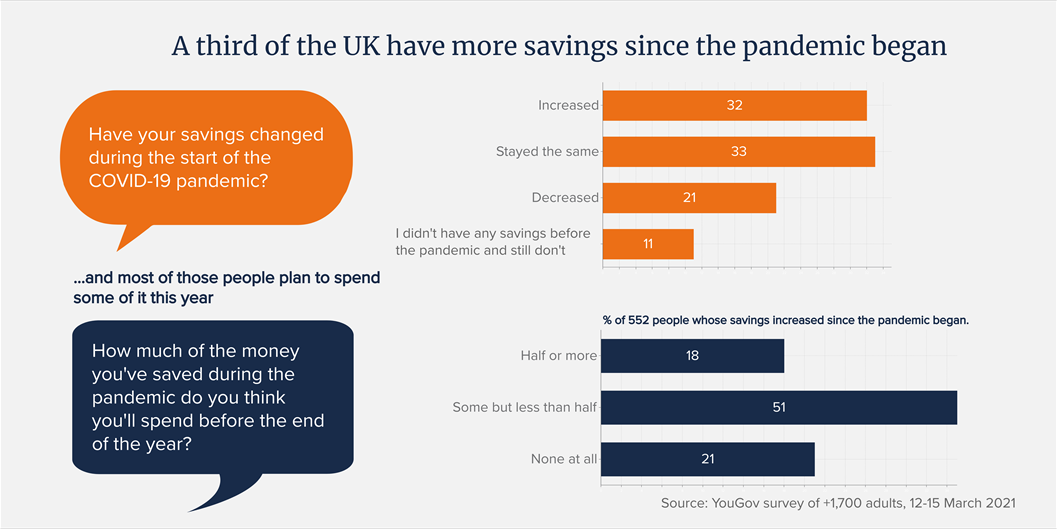 “We have movement, which is good news. But I wouldn’t say it’s a piece of cake now.”

Peter Berdowski, CEO of a salvage company tasked with dislodging a 400m-long container ship from the Suez Canal, which has held up the trade of approximately £7 billion of goods each day