The share prices of big US technology companies ended their record-breaking run last week. On Thursday, the Nasdaq stock index, which is heavy with US tech companies, dropped almost 5% after months of remarkable gains – and fell further on Friday.

The sharp reversal had a knock-on effect on markets around the world. Stock indices in Australia, Hong Kong and China all dropped on Friday. European stocks also slumped, with the STOXX Europe 600 Index falling almost 2% for the week, despite strong performances from some European banking stocks.

Big tech stocks are some of the few winners of COVID-19. Large technology companies have enjoyed a surge in their share prices in recent months, reporting strong earnings while traditional businesses are still struggling. This is partly due to how they are benefiting from new working patterns and changing consumer behaviour brought about by the pandemic.

Even after last week’s losses, US share prices are still higher than they were before the pandemic took hold. As markets closed on Friday, the S&P 500 remained over 5% higher than it was at the start of 2020, and almost 35% higher than at its lowest point in the year, during the height of COVID-19 infection rates in the US.

But last week’s fall sharpened questions that investors have been asking themselves recently: are the increasingly high valuations of the COVID-19 technology winners a cause for concern? And does last week’s sell-off signal the start of a market correction?

Although the reversal might bring back memories of the dotcom bubble bursting 20 years ago, there are several reasons why the comparison isn’t helpful.

The first is that the sell-off in US tech firms hasn’t spread to other assets, like bonds and currencies, which held up relatively well last week. The second is that the fall hasn’t been triggered by a market event; as happened in March this year when countries around the world began lockdowns in order to halt the spread of the virus. And finally, large technology companies are generating strong profits.

“While this correction may have further to run, and we continue to think that tech stocks will fare less well than most other sectors as the economic recovery continues, we don’t expect that a collapse in tech stocks will drag the entire market down for an extended period in the way that it did in 2000–02,” suggested Capital Economics.

While COVID-19 is putting plenty of pressure on share prices, there are also signs of encouragement, believes Mark Dowding of BlueBay Asset Management, which co-manages the St. James’s Place Strategic Income fund.

“From one perspective, markets look rosy, anchored by low borrowing costs, a steady recovery in some of the worst-hit sectors and just in need of some natural consolidation after a strong run. However, you could equally argue that the data points towards a mixed picture – economic divergence between sectors and countries is increasing and until there is a vaccine, the threat of new local lockdowns lingers.”

One piece of good news last week came in the form of US jobs data, which showed that first-time claims for unemployment benefits had dropped to their lowest level since mid-March.

While COVID-19 will continue to make markets volatile in the coming weeks and months, the upcoming US election will be another source of ups and downs. Last week, an index that tracks investor expectations of volatility pointed towards an expected spike around the date of the election. As the race for the White House becomes more combative, and as recent polls show that the competition is tightening, investors are bracing themselves for a choppy autumn.

Meanwhile, this week marks the renewal of trade talks between the UK and the EU. With time running out to reach an agreement, UK spokespeople have been re-signalling their willingness to accept a ‘no deal’ outcome.

Last week’s events were certainly dramatic. But they also highlight the importance of two tried-and-tested investment principles. Firstly, investors need to focus on their long-term goals and not get discouraged by short-term swings in the market.

And secondly, investing across a wide range of assets is the best way of ensuring that your investments aren’t tied too tightly to the performance of one specific company or sector. A sharp drop in a company’s share price is alarming if you have only invested in a handful of areas, but investors who are spread across a range of investments will be better insulated from such market movements.

People in the UK aged 47 or younger will now have to wait longer to take either a lump sum or income from their pension.

Last week, the government confirmed plans to raise the minimum pension access age from 55 to 57 in 2028. The change was first announced back in 2014, alongside the introduction of pension freedoms; but given the number of other changes, and the fact that it hasn’t been put into legislation, many will have forgotten about it.

The changes are a response to the increase in longevity and to encourage people to work for longer.

“Although many won’t be able to access their pensions for an extra couple of years, it’s not that common for someone to take benefits from their pensions at age 55 anyway,” commented Claire Trott, Head of Pensions Strategy for St. James’s Place.

“The Inheritance Tax and other tax benefits of pensions often means they are accessed last in retirement planning. This change just underlines the importance of taking regulated financial advice before and at retirement to ensure that income is accessed in the most tax-efficient manner, using savings of all kinds at the right time.”

The ‘Eat Out to Help Out’ Scheme gave a much-needed boost to UK restaurants last month (see below). On the days that the half-price discounts applied (Mondays to Wednesdays, up to £10 off), restaurant visits were substantially higher than on the same days last year – especially on the Monday Bank Holiday. However, the Treasury will be carefully studying customer behaviour over the coming days and weeks, to see if further support is needed for the UK’s beleaguered hospitality industry. 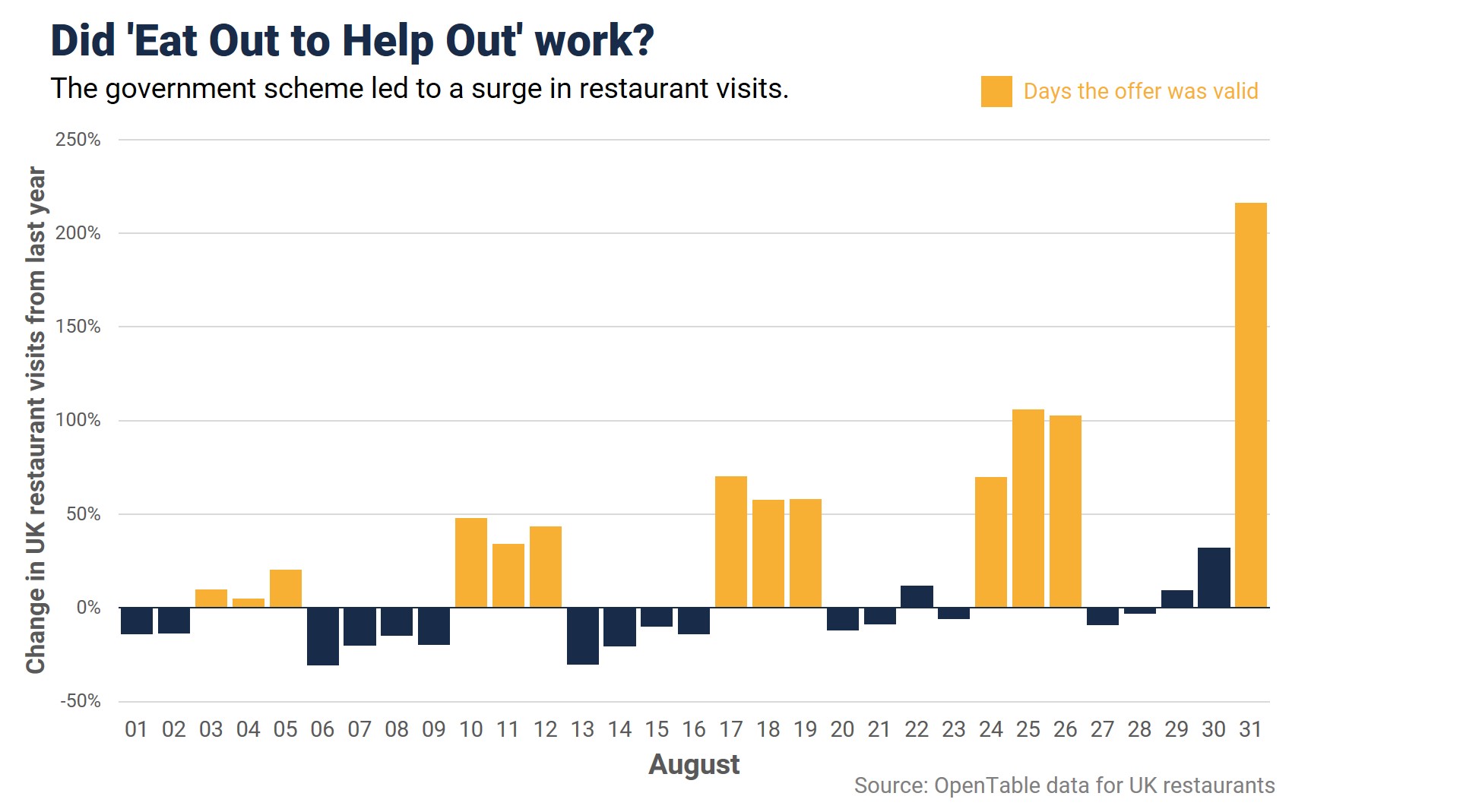 – The UK’s Brexit negotiatior, Lord David Frost, dials up the rhetoric ahead of crunch talks with the EU this week.

BlueBay is a fund manager for St. James’’s Place.