A statement by the Federal Reserve, the US central bank, was the biggest driver of markets last week – mostly for what it didn’t say. Although the bank confirmed that it will hold interest rates at their very low levels until the end of 2023, it didn’t commit to boosting its large bond-buying programme, as some market observers had been expecting.

The announcement contained “no real surprise”, says Keith Wade, Chief Economist & Strategist at Schroders, which manages several funds for St. James’s Place. However, it “may disappoint those who were looking for more explicit guidance on how policy would respond to changing economic conditions,” he adds.

Global equities slid on the news, and there were dips in the share prices of some major US technology companies. However, given their gains earlier in the week, US stocks in the S&P 500 index were only marginally down for the week.

As well as the response to the pandemic, another major driver of market volatility is the upcoming US election. With the date of the vote drawing closer, investors are assessing the likely impact of either candidate winning the race.

But while the headlines focus on the tax, legislative, and economic policies that might affect the US economy, investors might be heartened to find out that since 1933, if the dotcom bubble and Global Financial Crisis are taken out of account, there has been almost no difference in average stock market returns during the presidential terms of the Democrats and Republicans.

Late last week, US Supreme Court judge Ruth Bader Ginsburg passed away. Her trailblazing advocacy for women’s rights and civil liberties made her a liberal icon, but her position on the highest court in the US must now be filled just six weeks before the election. The decision on who will replace her will generate controversy.

Former UK prime ministers, as well as politicians in the US, lined up last week to share misgivings about government legislation that threatens to unravel post-Brexit trade talks. The proposed law would override the Withdrawal Agreement the UK signed with the EU earlier this year, and in so doing break international law, in order to enable the UK to override customs arrangements in Northern Ireland. The bill made it through the hurdle of the second reading in the Commons last week, with some Conservative MPs abstaining; others may revolt later.

Having caused more tension between the two negotiating teams, the bill has increased the risk of a no-deal outcome. However, last week European Commission President Ursula von der Leyen said that she’s convinced a deal is still possible.

Given that time is running out to reach a deal, Brexit is returning as one of the main issues on the public’s mind. In fact, it may soon take first place above health and the economy, according to a recent poll (see below). The possibility of a no-deal Brexit has been weighing on UK equities and sterling.

But Brexit aside, last week’s headlines show that there is plenty of economic recovery still to do. As the week ended, scientific advisers were publicly mulling over the possibility of a second national lockdown perhaps to coincide with the upcoming half-term. Meanwhile, official figures showed a sharp rise in unemployment in the three months to July – the sharpest quarterly increase since 2009. And, in a sign of the times, the Bank of England even said last week that it’s exploring how it could lower interest rates into negative territory next year, if the economy stalls.

For investors in UK companies, all these data point to clear risks. However, a balanced portfolio that blends locally-focused companies with overseas earners, can help mitigate those risks.

Fund managers have been preparing for choppy waters ahead by considering carefully how their investments will perform in the face of likely Brexit outcomes, and making changes if needed, says Chris Field of Majedie, which co-manages UK equity funds for St. James’s Place.

“Brexit is of little relevance to the long-term earnings potential of Unilever, AstraZeneca, Roche, Boston Scientific or 3i, for example. We believe investments in these companies will be rewarded from compounded growth, strong product pipelines and excellent returns on underlying assets.”

He adds: “Moreover, one of the key lessons we have learned over many years of investing is that heightened uncertainty often goes hand in hand with extraordinary long-term opportunity.”

He’s no showman, but the party veteran is expected to continue the economic policies of his predecessor Shinzo Abe, suggests Yoshi Ito of Nippon Value Investors, manager of the St. James’s Place Japan fund.

“The new cabinet members also seem to indicate continuity from the previous administration. We think Mr Suga’s inauguration as prime minister is more likely to have a positive effect on the Japanese economy and the Japanese stock market in general.”

Last week, the High Court dismissed an appeal by two women claiming that the government changes to the State Pension age for women were unlawful. The ruling serves as a reminder of the gender imbalance that already exists when it comes to pension saving.

Around four million women who were born in the 1950s were affected when the pension age was raised from 60 to 661, with many of them feeling that there was poor communication and very little time for them to make any material changes to their retirement savings.

“The High Court ruling will be a disappointment to many women who had hoped for an about-turn by the courts. It is difficult to see that the Supreme Court will see the issue any differently. Equality of benefits has been on the agenda for a significant time now, even if some have felt that the communication could have been better,” says Claire Trott, Head of Pensions Strategy at St. James’s Place.

The frustration that these women are feeling is entirely understandable when they have already experienced many financial penalties throughout their lives which will have impacted their ability to save for a decent pension. Traditionally they would have taken on many of the caring duties for their children or given up work to care for elderly relatives, which, coupled with their inability to earn as much as their male colleagues because of the gender pay gap, will have seriously affected their retirement savings.

But what of younger women, those born in the late 60s and onwards? They will have more time to plan their retirement savings, but there are still financial penalties that make saving difficult. The pension age is already set to increase to 67 by 2028 and to 68 by 2046, with fears that this could be raised even higher in order to cover the cost of benefits connected with the COVID-19 pandemic.

Brexit dropped down the public’s list of concerns earlier this year, when the health and economic costs of the COVID-19 pandemic became apparent. However, the issue has returned as one of the most important topics facing the country, given how little time is left to find a post-Brexit trade deal with the EU. This represents a challenge for the government as its handling of the pandemic comes under scrutiny. 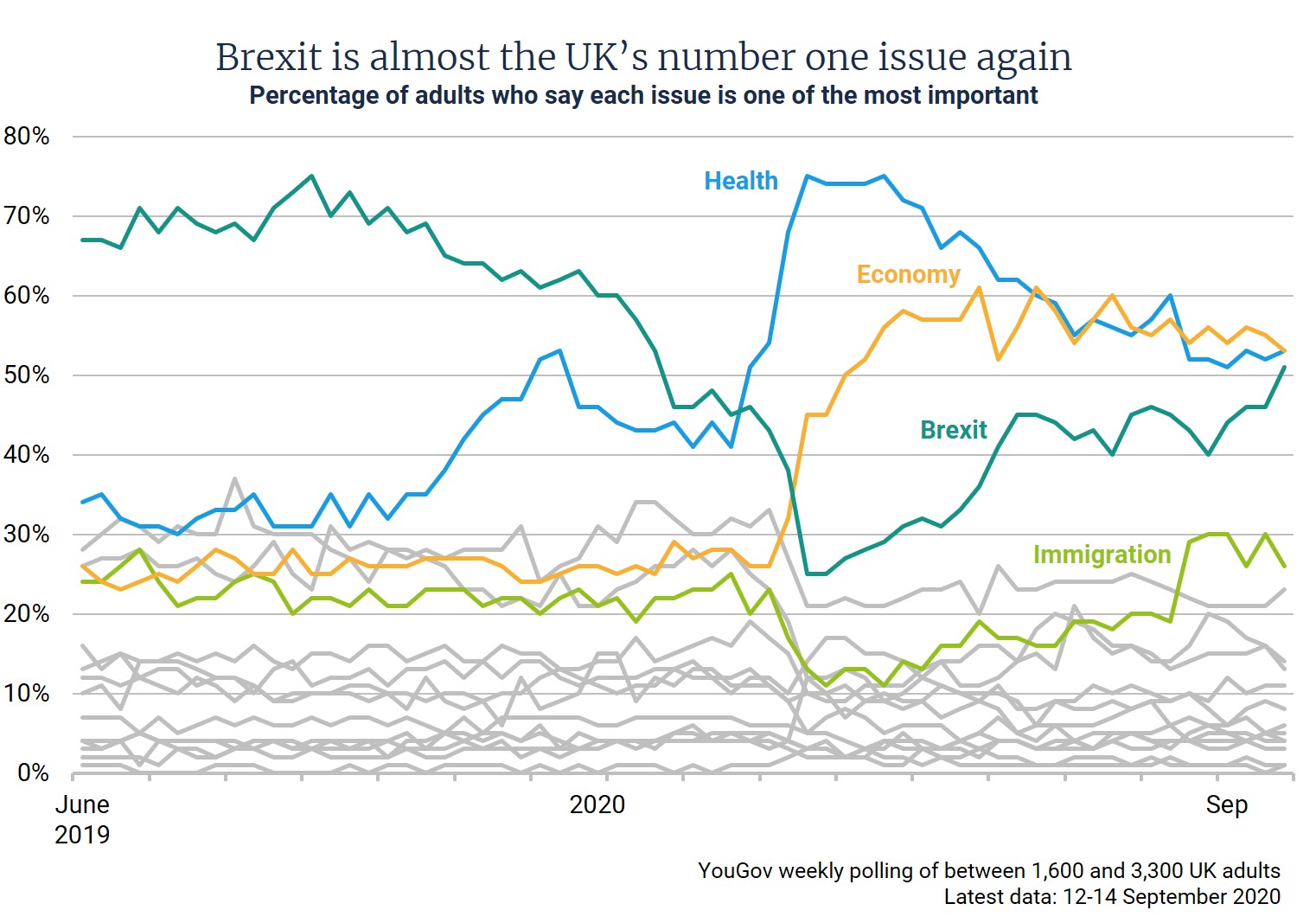 “To make life a little better for people less fortunate than you, that’s what I think a meaningful life is. One lives not just for oneself but for one’s community.”