Many big technology companies in the US have reported strong earnings and have seen their share prices rise during lockdowns. In fact, the country’s Nasdaq stock index, which is heavy with technology companies, reached a record high each day between Monday and Thursday last week.

Buoyed by companies like Microsoft, Facebook, Amazon and others, its rise shows how the damaging effects of coronavirus aren’t felt by all companies equally. In fact, while traditional businesses are still lagging, tech stocks are roaring ahead.

This seems odd because the health of the ‘real’ economy hasn’t improved a great deal since the pandemic took hold in March. There are still high levels of unemployment around the world, as jobs data in the US showed on Friday. And the global recovery may be slower than people first hoped – for example, the Bank of England said on Thursday that the UK economy won’t bounce back to its pre-virus levels until the end of next year.

So far, tech companies also seem to be well-insulated from the debate in Washington surrounding the next round of COVID-19 support. After talks fell apart last week, Trump signed executive orders pushing certain measures through, including for a new jobless benefit that’s lower than before.

“Investors are assuming that [technology] businesses are completely invulnerable to economic activity, like perpetual motion machines that can generate higher and higher profits regardless of what’s happening in the rest of the world,” notes Anatole Kaletsky, founder and co-chairman of Gavekal, an economics consultancy.

But even though they’re thriving now, tech companies aren’t completely immune from the economy around them. Their revenues still come from the people and businesses that make up the real world. For example, if lots of businesses run out of cash due to COVID-19 lockdown measures, then many of them will reduce their advertising spend with Facebook and Google.

So, should investors be worried about the gap between the health of the real economy and the rising share prices of a narrow band of successful companies?

The ‘disconnect’ between the two is a cause for concern, says Kaletsky. However, the answer is not to avoid these companies completely while momentum drives their share prices higher and higher, he adds. Rather, responsible investors will maintain a well-balanced set of investments that isn’t overexposed to any one business or sector.

Time runs out for TikTok
Last week, President Trump ordered new limits on American companies to stop them dealing with Chinese social media apps TikTok and WeChat. The order says that the data collected by these companies would allow the Chinese Communist Party access to Americans’ personal information.

The move is the latest in a series of disputes between the US and China, as tension mounts between the two countries. It follows similar moves earlier this year by the US against Huawei, the technology manufacturer, also citing national security concerns.

Chinese stocks lowered on the news about TikTok and WeChat. Tencent, the parent company of WeChat, saw its share price sink on Friday and on Monday morning. Tech giant Microsoft is now in talks to buy TikTok’s US operations.

The two countries will resume talks on their trade deal later this month. How those talks play out will be one of several factors that will influence the direction of markets in the second half of this year. The upcoming US election is one such issue, argues Mark Dowding of BlueBay, which co-manages the Strategic Income fund for St. James’s Place.

US voters will go to the polls again on 3 November, and the subject of China-US relations will be a big theme in the election. The pressures of such a battle might sway Donald Trump to act in a way that disrupts the trade talks between the US and China, says Dowding.

He adds: “Although the perceived wisdom is that the White House won’t want to risk detonating this deal and putting the stock market into a tailspin, there is a sense that Trump is becoming more erratic and desperate as the days pass.”

Regardless of the outcome of the US-China talks, investors will be mulling over the impact of either candidate proving successful. Technology stocks might also be as resilient to November’s election as they have been to COVID-19, but investors will pay close attention to the race nonetheless.

It seems that UK savers’ preference for cash is a hard habit to break. The latest ISA statistics for the 2018/19 tax year show that cash ISA subscriptions increased by 1.4 million on the previous year, accounting for over three-quarters of all ISA subscriptions. That translates to a rise in payments into Cash ISAs of £7.3 billion.¹

This is a reversal of recent trends, which had seen Stocks & Shares ISAs attract a bigger share of the market. The figures reflect the poor year for stock markets in 2018, as the US/China trade war topped a list of problems that dented investors’ confidence.

The stats also underline the current challenges faced by those saving for retirement. The COVID-19 crisis is pulling people between building up a cash buffer or saving for the long term. Savings rates are the lowest in history, and are likely to remain so for some time. On the other hand, the economic impact of the pandemic means that the short-term outlook for stock markets is uncertain.

Added to that, rising care costs are eating into inheritances that many were planning to put towards their own retirement savings.

A study published last week by the Office for National Statistics revealed that only 11% of people saving for retirement expected cash savings to make them the most money. Over 40% of people believe that property is the best option for their pension savings, compared to a third who favoured personal and workplace pensions.²

An investment in equities (funds) does not provide the security of capital associated with a Cash ISA or a deposit account with a bank or building society.

The favourable tax treatment given to ISAs may not be maintained in the future as they are subject to changes in legislation.

The price of gold has shot up in recent months, breaking $2,000 per troy ounce for the first time in its history1.

The metal is known as a ‘safe haven’ asset – meaning that investors tend to buy it during times of uncertainty, because its value tends to fluctuate less than some other types of assets.

However, it’s worth remembering that over the long-term, stocks and shares have historically performed better as investments than gold or other ‘safe haven’ assets. 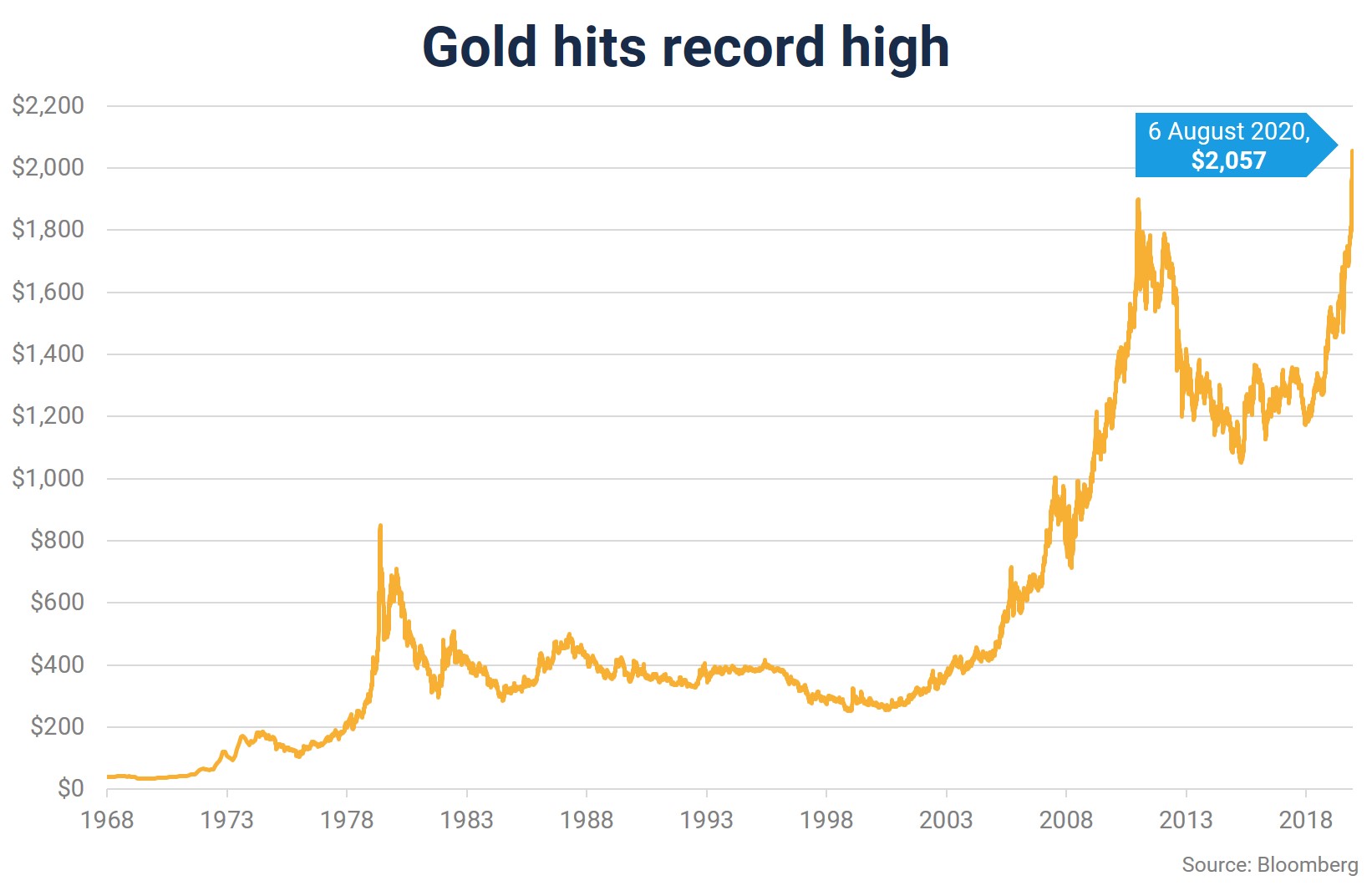 “It won’t appeal to many people, but we only need one person.”

– Property executive Derrick Beare, whose company has just listed a terraced block overlooking Regent’s Park in London for £185 million, making it the UK’s second most expensive home if sold.